The Pichette Project is located in the Vincent Township just south of Nezah and Canadian National Highway 11 about 60 km west of the mining town of Geraldton, Ontario. The Pichette covers part of the well-endowed Beardmore-Geraldton Greenstone Gold Belt region (>4M ounces historical gold production). The Vincent Township is 28 kilometers east of the village of Beardmore and the Leitch Mine which produced 850,000 ounces of gold and 100,000 ounces of silver at an average grade of about one ounce per ton[1]. Access is excellent, with year-round paved and gravel roads to support survey and drilling work during all seasons. 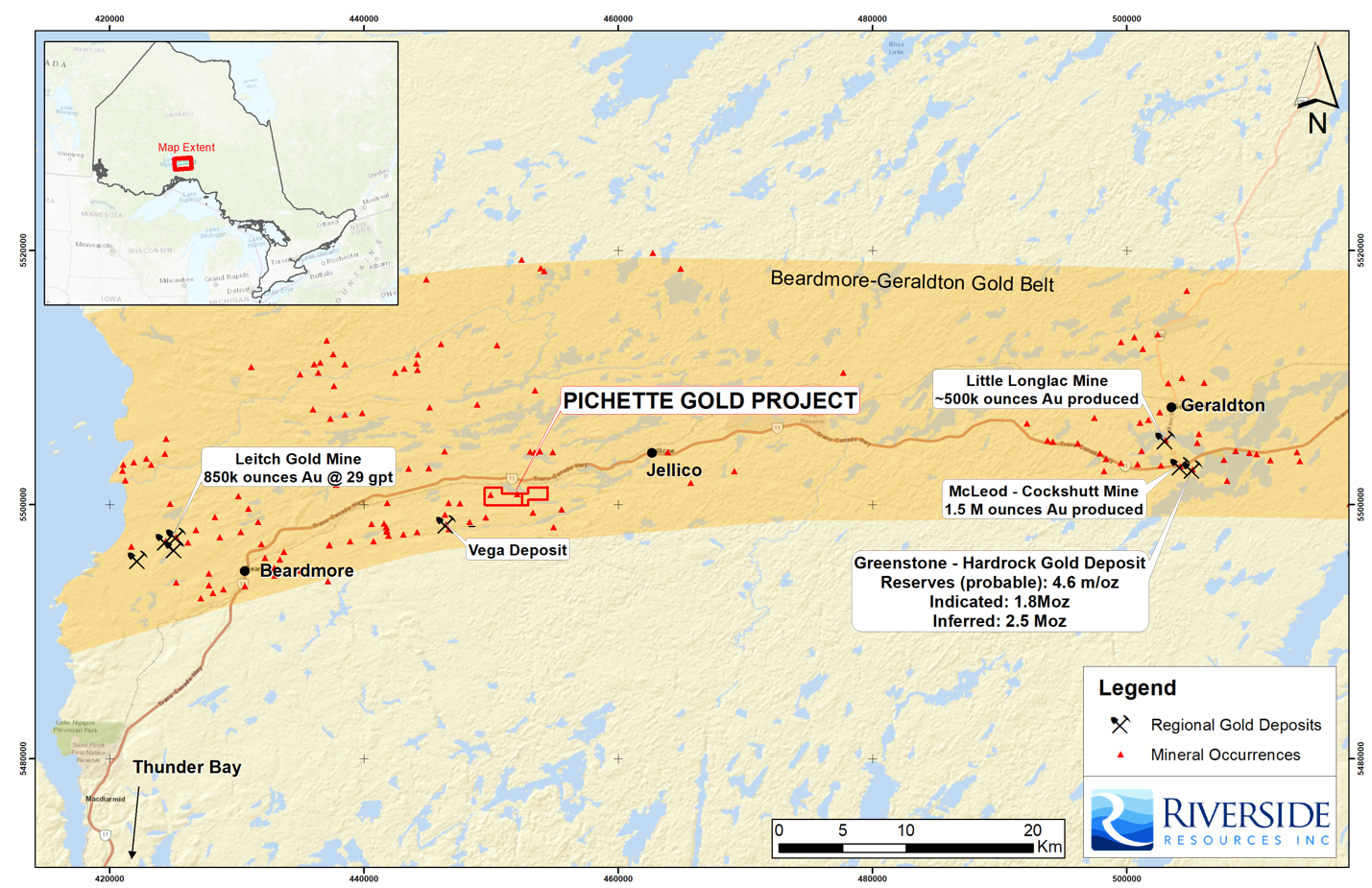 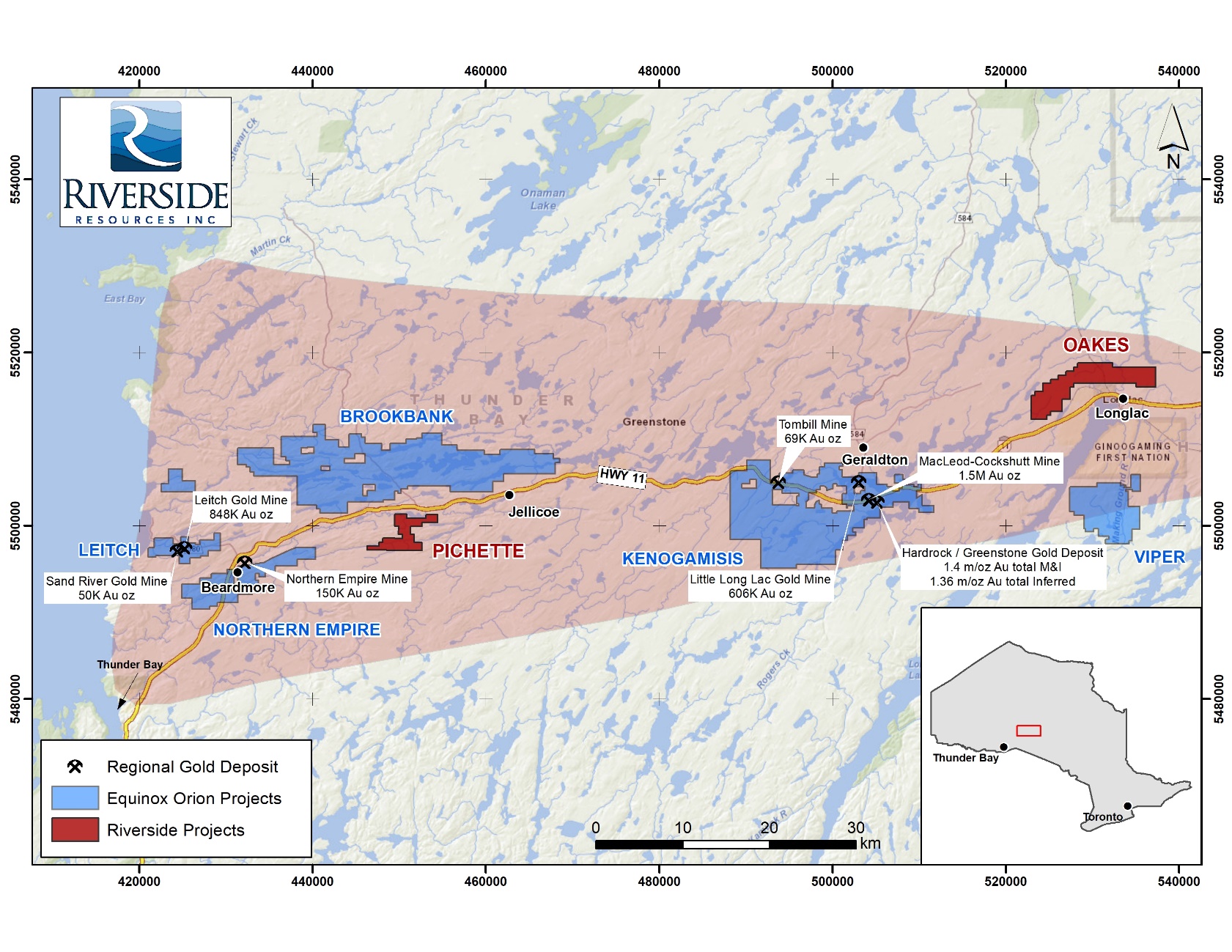 Prospectors were attracted to the area following the discovery of gold in the Beardmore and Geraldton areas in the 1930s. Assessment reports from the 1970s and 1980s indicate high-grade gold samples were collected on the project area in the 1 ounce/ton range. Prospector reports discuss rusty quartz veins showing pyrite, pyrrhotite and arsenopyrite mineralization. Past work on Riverside’s Pichette Project has included a VLF, Mag geophysics surveys in addition to two trenching and two (2) drill campaigns.

Another round of NQ drilling was conducted northeast of the Pichette showing in 1983. Eight drill holes, five of which are on the Pichette Project (990 feet), were completed targeting geophysical anomalies. From reviewing stored core, it appears some of the geophysical targets were graphitic zones within argillitic rock. However, gold was encountered in several of these historic holes associated with narrow iron formation units within the larger meta-volcanic packages. Alteration mineralogy comprises chlorite with sericite and carbonate being found within the mineralized shears/veins.  Gold was also recorded in drill logs being associated with pyrrhotite stringer veins and in one hole with arsenopyrite and tourmaline quartz-carbonate veins. Core reviewed by Riverside comprised strongly foliated interbedded meta-sediments and meta-volcanics showing strong silicification with sericite and both pyrite and pyrrhotite mineralization. Narrow asbestos veins are noted in P5-83 core which may indicate the presence of a mafic intrusion at depth. Intrusive rocks were noted in the field within the southwest quadrant of the project.

Historical assays from the 1980s in both surface sampling and drill core indicate that gold mineralization is associated with arsenic which is similar to mineralization at the Hard Rock deposit to the east.

The project is underlain predominantly by east-west trending and steeply south to vertically dipping metavolcanic and metasedimentary rocks. Metavolcanic rocks consist of massive and pillowed, locally amygdaloidal, flows of basaltic composition along with related tuffaceous rocks. They are locally intercalated with coarser-grained rocks. Mafic metavolcanic rocks are fault-bounded against domains of metasedimentary rocks closer to the center of the project. The southern metasedimentary panel consists of a polymictic conglomerate and greywackes suggesting affinity with Timiskaming Formation conglomerates in the Timmins (Porcupine) Mining District. Metasedimentary units also contain feldspathic and quartzose sandstone and wacke, siltstone, carbonaceous argillite and hematitic iron formation. Intermediate to mafic intrusions cut the metavolcanic rocks on the southern part of the property and consist of quartz diorite, diorite and gabbro (see Figure 2).

The Pichette project is transected by an east-west trending brittle and ductile shear zone (unnamed). Deformation can be traced across the project area from the Pichette showing to near the eastern boundary. The previously cleared and trenched areas worked by others consists of banded recrystallized chert-magnetite iron formation striking east-west. Gold mineralization is associated with strongly sheared mafic metavolcanics striking 80 degrees with iron carbonate, magnetite, pyrite, sometimes pyrrhotite and sometimes arsenopyrite. Commonly, quartz veins have intruded conformably with the metavolcanics and iron formation contact, minor quartz-stringer can be found crosscutting the banded iron formation.

Iron Formation while not the host rock for gold appears to be a weaker unit that tends to be subject to shearing and shows best the folding and deformation within the area. The volcanic and sedimentary units all show isoclinal folding with most units dipping steeply to the south and plunging gently to the west. All this past deformation has resulted in greenschist metamorphism of the bedrock and a strong east-west foliation fabric.

Riverside’s first phase of work included reviewing the historical core and old workings in addition to prospecting, mapping and sampling. The recent work confirmed two previously identified areas in addition to several new mineralized exposures. There are two predominant target orientations on the project one which trends east-west and is associated with large shears related to banded iron formation and contact zones; and a second target trend that strikes at 030 degrees northeast and is defined by smaller cross-cutting faults and/or dikes. Magnetic surveys conducted by previous operators has been helpful in outlining banded iron formation, diabase dikes and geological contacts where overburden masks the underlying bedrock. Several of the old drill collars were located in the field and the core from a 1983 diamond drilling campaign is stored in the Ministry of Northern Development and Mines core warehouse in Thunder Bay which was examined as part of the field review.

Riverside’s first-phase exploration program defined several target areas for follow-up survey work and drill target refinement (see Figure 2 below). There are several large (3m wide) shear zones defined by strongly foliated (phyllitic) material which does not appear to have been subject to past exploration. Two of these shears were noted to be located along the boundary of iron formations as at the Pichette showing and pose a highly prospective target planned for further follow-up and potential drilling. Where the east-west trending regional shears intersect northeast trending faults forms another area for future detailed exploration.

Deposits in the Beardmore-Geraldton Greenstone Belt

Both Beardmore and Geraldton have past producing gold mines of notable high-grade. The MacLeod-Cockshutt Mine, and the Central Patricia and Pickle Crow mines in Pickle Lake are non-stratiform deposits. Non-stratiform deposits contain sulfide-rich alteration zones immediately adjacent to late structures and are similar to mesothermal vein-type gold deposits. Late quartz veins and/or shear zones are present in most known BIF-hosted gold deposits. The distributions of gold-bearing veins and sulfide-rich zones are commonly controlled by fold structures. Major faults of regional scale have been recognized near many non-stratiform deposits. Irregular, massive lenses of sulfides and quartz occur in a folded series of greywacke and iron formation in the Hard Rock and MacLeod-Cockshutt mines (Horwood and Pye, 1951). These massive replacement lenses (up to 65%, sulfides) cut the folded iron formation and are related to quartz-carbonate veins up to 0.6 m wide. Veins are usually barren of gold mineralization except where they contain sulfides, consisting primarily of pyrite, arsenopyrite and pyrrhotite.

Regarding previous historical operators work on the Pichette Project. The reliability of historical data is uncertain but is considered to be relevant by Company management for purposes of exploration discussions (non of the historical sampling was resampled and verified). There is a risk that any confirmation work or future drill testing may produce results that substantially differ from the historical results.  The scientific and technical data contained in this write-up pertaining to the Pichette Project was reviewed and approved by Freeman Smith, P.Geo, a non-independent qualified person to Riverside Resources, who is responsible for ensuring that the geologic information provided in this news release is accurate and who acts as a “qualified person” under National Instrument 43-101 Standards of Disclosure for Mineral Projects.