The Oakes Project is located in the Oakes Township just north of Canadian National Highway 11 and about 2km north of the town of Long Lac, Ontario. The Oakes Township is part of the well-endowed Beardmore-Geraldton Greenstone Belt region, located northeast of Thunder Bay, Ontario. The Geraldton region has a long and rich mining history and has produced 4.1 million ounces of gold over the past 100 years including the combined MacLeod-Cockshutt Mine, which produced 1.5 million ounces of gold . More recently, the Hardrock Project held by Greenstone Gold Mines (jointly owned by Centerra Gold and Premier Gold Mines) has elevated attention to the area by announcing their intention to mine their gold resource near Geraldton, Ontario. The Hardrock Project mineral resources include: 1.4 million measured and indicated ounces and 1.36 million inferred ounces of gold2 . 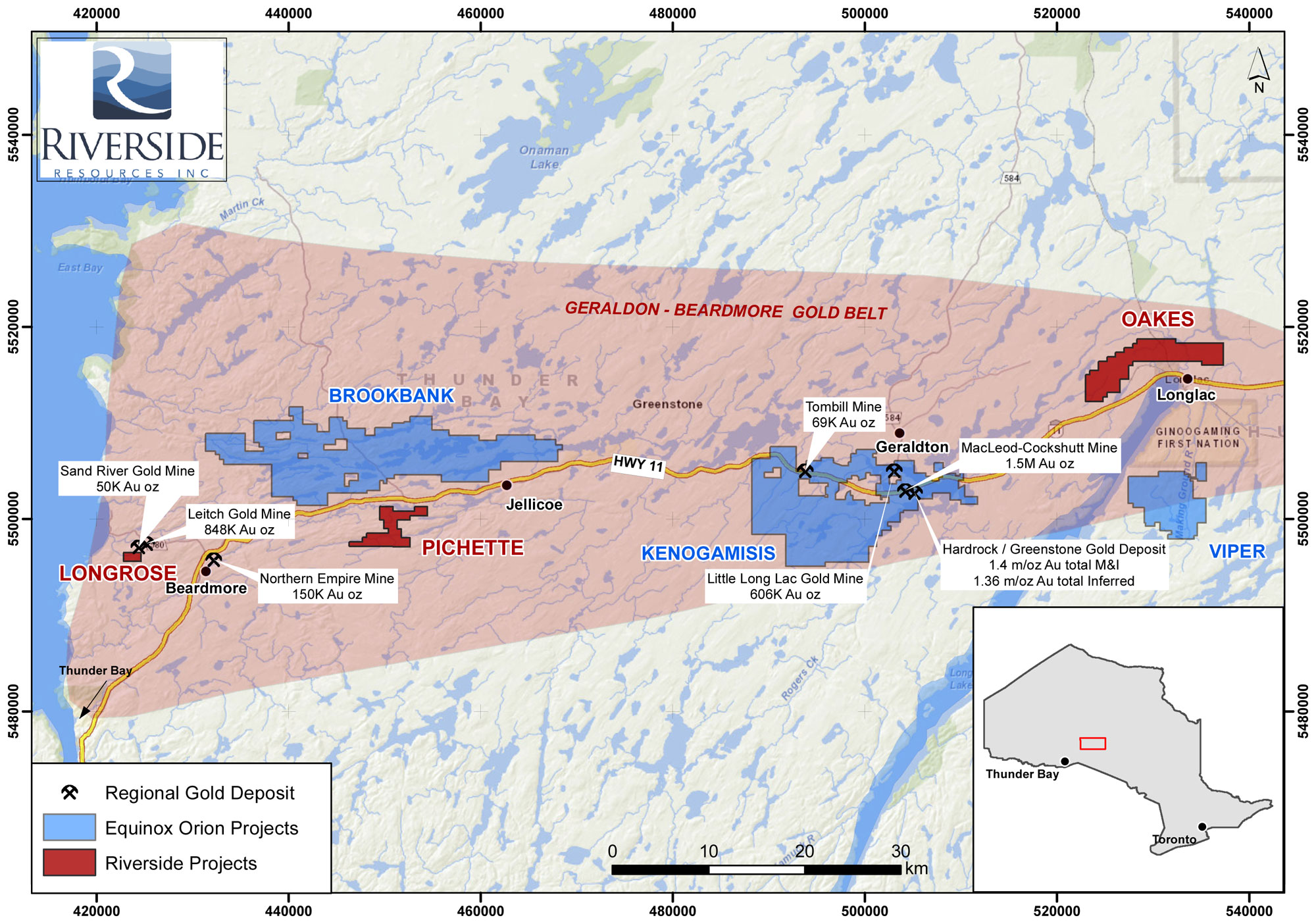 Past work on the Oakes project includes two drill campaigns, more recent VLF, Mag and IP geophysics in addition to a soil chemistry survey and trenching campaigns. Historical drilling by Hard Rock Gold Mines includes 7 short, BQ-sized holes drilled between 1949-51. Five of the drill holes from the 1950s intersected gold grades above 3 g/t . Only a few rare pieces of core from these past programs are available such that the old work will need to be confirmed and incorporated into new work being conducted by Riverside to produce bonified exploration targets. Drill logs report the mineralized zones that were sampled historically comprised quartz-carbonate veins within sheared mafic volcanics with sulphide mineralization (pyrite, chalcopyrite and galena). This drilling campaign was conducted to trace known veins discovered at surface at depth.

In 1993 in a different area two holes were drilled by Greater Lenora Resources Corp. to test two coincident VLF and copper-in-soil geochem anomalies. Drill logs from the historical reports show the mineralized zones that were sampled comprised meta-basalts (greenschist to amphibolite facies) and tuffs showing silicification and sulphide mineralization (pyrite, chalcopyrite and pyrrhotite). Hole GL-93-1 was drilled to a depth of 153 m and returned anomalous results in gold and copper. Hole GL-93-2 (155 m) intersected an 8.3 m length of semi-massive pyrrhotite mineralization starting at 112m down hole with one, 1.5 m long sample returning 3.3 g/t gold. The emphasis of this exploration appears to have been exploring for copper.

More recent work conducted by Golden Chalice Resources (2010-12) included an IP survey and a trenching campaign. The trenching campaign identified several mineralized shears coincident with VLF and IP chargeability geophysical anomalies. The best trench of six, Trench #1, returned three channel samples of 4.77, 4.17 and 3.41 g/t gold within shear-hosted quartz-carbonate veins. In addition, 26% of the 20 samples taken at Trench #1 returned greater than 1 g/t gold. The best composite sample results from this older work in Trench #1 were 1.3 g/t over 4 m and 1.32 g/t over 4 m. None of the trench work has been followed-up on and most of the complimentary geochemical anomalies have not been drilled. Riverside sees ample opportunity at Oakes to further consolidate the past work and build on the survey work that has showed positive results for gold so far. Riverside in July of 2019 sampled selective sections of the shear zones showing sulphide mineralization that retuned good gold values of 19.7, 31.9 g/t and 6.9 g/t (see press release dated July 29, 2019)

Riverside’s fieldwork indicates gold mineralization at Oakes is hosted within shear zones along contacts between mafic volcanics and gabbroic sills or felsic volcanics and less commonly with diabase dikes.

In November 2019, Riverside completed a second round of exploration.  The second phase of recently completed work was conducted to identify the east and west extension of this HG shear zone. Riverside geologists mapped and sampled the eastward extension on this shear and found more high-grade gold including 7 g/t gold from the HG shear zone. The new surface samples are believed to demonstrate a mineralized strike length for the HG zone of about 600 m. These samples align with older VLF (1999) and IP anomalies from a survey completed in 2010 (see Figure 3). The older geophysics shows the anomaly extends both east and west along strike suggesting a potential mineralized strike length of 2.6 km from this data.

Three trenches were completed in 2010 along the HG zone. Trench #1 shows several shears, the largest being 3 m wide and exposed over an 80 m long strike within the trench. Two quartz-carbonate shears were sampled by Riverside in Trench #1. Three of the five samples taken from this trench returned 19.7 g/t, 31.9 g/t and 6.9 g/t gold. Trenches 2 and 3 were sampled in November 2019 by Riverside with one of two samples taken at Trench #3 returning 6.8 g/t gold (2nd exploration program). This sample appears to align with drilling conducted by GLR which returned >3 g/t gold within sheared metavolcanics rocks and is open along strike for further exploration drilling.

Trench #1 in particular showed several shears, the largest being 3 m wide and exposed over an 80 m long strike within the trench. Two quartz-carbonate shears were sampled by Riverside in Trench #1. These shears are within mafic volcanics with sulphide mineralization; primarily pyrrhotite and pyrite. Two of the 5 samples taken from this trench returned 19.7 and 31.9 g/t gold (see Figure 2 below).  Another sample 30 m to the east returned 6.9 g/t and still another sample 275 m along trend returned 1 g/t gold. These Riverside samples are on trend with drill hole GL-93-2, drilled by Greater Lenora Resources Corp. in 1993 which returned >3 g/t gold within sheared metavolcanics rocks. Riverside believes this drill intercept and the trench samples demonstrate a 400 m strike length for this target (HG Target) that could extend, based on interpretation of geology and geophysics for 2 km in total strike length (this total strike length needs to be confirmed with more field studies).

Similar parallel targets were delineated to the south of the northern most HG Target. These zones are oriented roughly east-west and coincident with VLF, IP chargeability and soil geochemistry anomalies. The Brinklow zone may align with the historical hole DDH50-01 which intersected anomalous gold (>3 g/t) within mafic volcanics at only 7.6 m downhole.

The third most southern Crib Target extends from the pipeline right-of-way to the southeast corner of the Project and is located along the boundary of mafic volcanic and pillow basalts that also coincides with a VLF and partial gold-in-soil anomaly.

Two other N-NW trending targets were also identified. One of these targets is identified by Hardrock Gold’s historical drill holes #1, #3 and #4 which all returned anomalous gold intercepts >3 g/t gold[1]. One grab sample south and on trend from these holes returned anomalous gold (0.7 g/t) and may define another target area. The trend of this zone is the same as another zone identified near the eastern boundary.

This eastern structure target is delineated by a strong linear magnetic low, interpreted as a fault, and a large, coincident north-south trending gold in soil anomaly.  Field surveys near the southern boundary found evidence of faulting in bedrock. 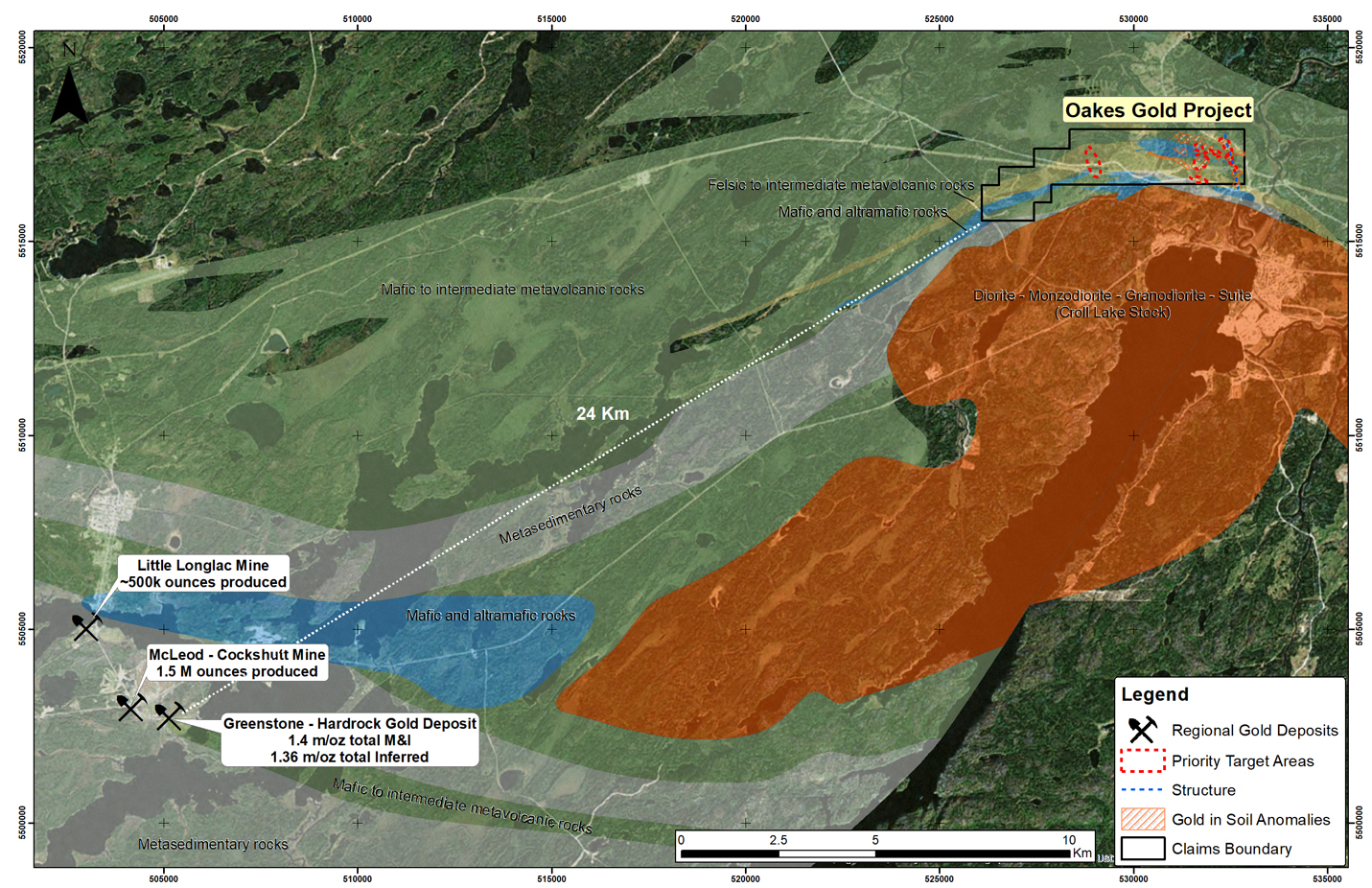 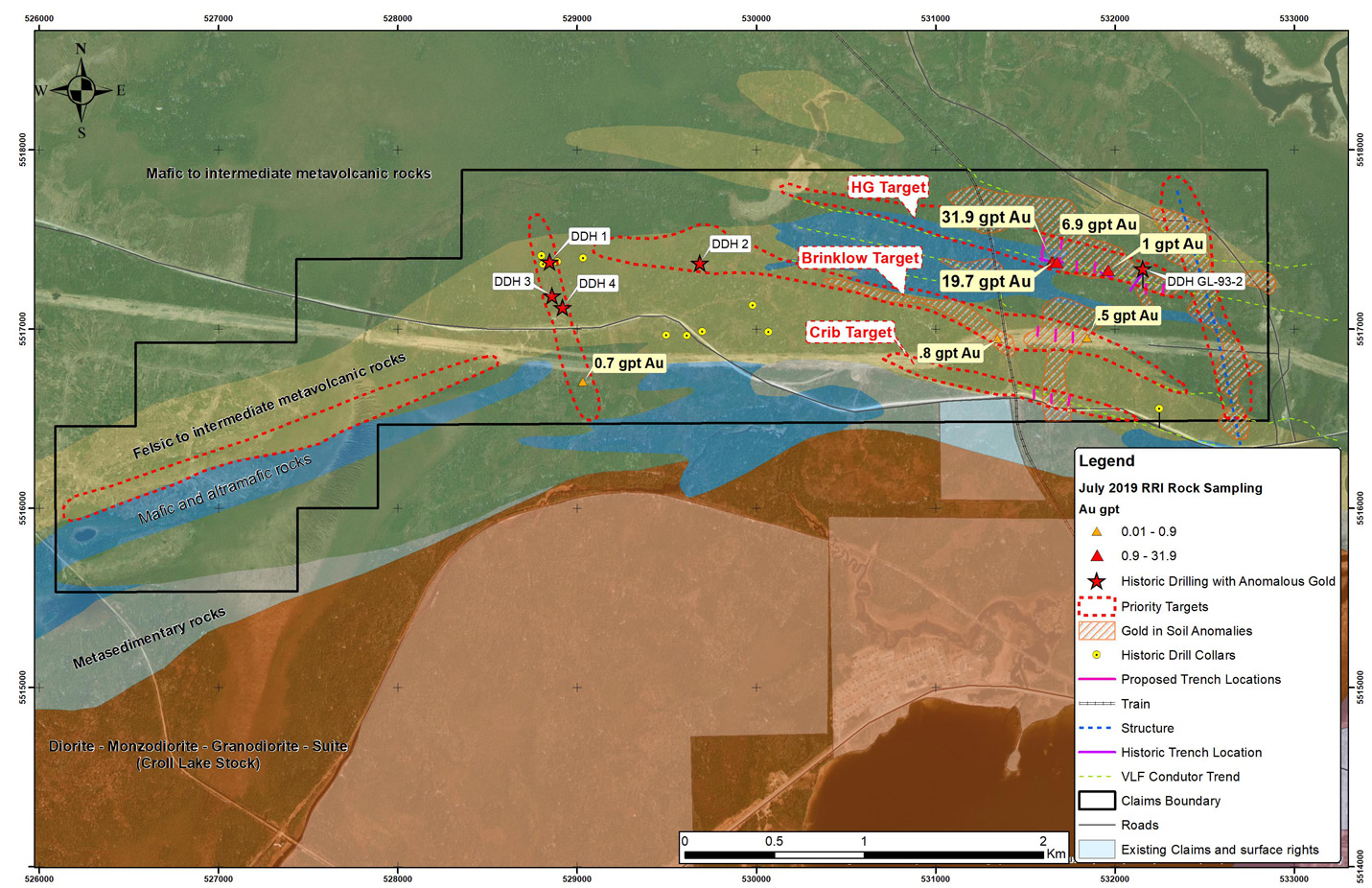 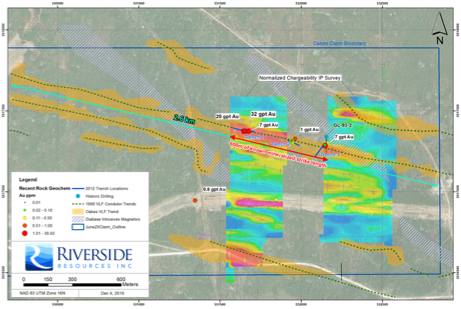 The Beardmore-Geraldton Greenstone Belt (BGGB) has produced about 4.1 million ounces of gold and retains gold resources of several million ounces. The BGGB in the area of the Project is located along the boundary between the Wabigoon and Quetico sub-provinces in the Superior province of the Canadian Shield. These boundaries are often major fault breaks, which can host large gold resources as is found further to the east in the Abitibi Greenstone Belt. Targeting on the Oakes Project and in the belt has focused on the steeply dipping, brittle-ductile shear zones which can comprise various lithologies, metamorphic grades, and alteration styles. The shear zones at Oakes typically strike east-west along the boundary or parallel to the BGGB similar to other past producers and identified gold resources in the area.

The host rock in the project area comprises Archean-aged, meta-volcanics known as the northern volcanic panel part of the larger BGGB and is located where the panel appears to wrap northward around the Croll Lake Stock similar to structural styles of Abitibi gold camps in Eastern Ontario. Specifically, the bedrock comprises a suite of felsic, intermediate and mafic volcanics with gabbroic sills. Volcanic rock types include rhyolitic and andesitic flows, tuffs and breccias, chert, iron formation, minor metasedimentary and intrusive rocks. The more mafic units include basaltic and andesitic flows, tuffs and pillow basalts. The Croll Lake Stock comprises diorite through to granodiorite and syenite. The youngest bedrock includes the northwest trending diabase dikes which are noted throughout the property and region. The metamorphosed mineralized zones are marked by silicification and sulphide mineralization including pyrite, pyrrhotite, galena and arsenopyrite found along contact zones or cross-cutting structures. These mineralized contact zones have been defined by past VLF/Mag surveys complimented and further refined more recently (2008) by follow-up IP surveys and confirmed by trenching in 2010.

The scientific and technical data contained in this news release pertaining to the Oakes Project was reviewed and approved by Freeman Smith, P.Geo, a non-independent qualified person to Riverside Resources, who is responsible for ensuring that the geologic information provided in this news release is accurate and who acts as a “qualified person” under National Instrument 43-101 Standards of Disclosure for Mineral Projects.

The rock samples collected by Riverside's field crew at the Oakes Project included grab samples of mineralized outcropping rock consisting of composites of bedrock fragments rock-sawed or hammer-chipped from 0.3 and 1.0-metre-long intervals across rock faces showing evidence of shearing and silicification. All of Riverside's rock samples were processed in Thunder Bay, Ontario at AGAT Labs where gold content was determined by fire assay with atomic adsorption finish and ICP-mass spectrometry for 32 other elements.