Riverside and BHP have signed a two-year, US$2,000,000 Exploration Financing Agreement with BHP Exploration Chile SpA (“BHP”) for the funding of generative exploration in the copper producing belt of Mexico (the “Program”). The Program will focus on identifying and developing exploration opportunities leading to the discovery of new large copper deposits within an Area of Interest using Riverside’s technical knowledge base of copper systems and strong generative exploration team strategically based in Hermosillo, Sonora.

BHP will fund US$1,000,000 on an annual basis for a minimum of two (2) years for generative grass-roots exploration within northeastern Sonora in the region of many copper deposits and some very large copper operations (Figure 1). 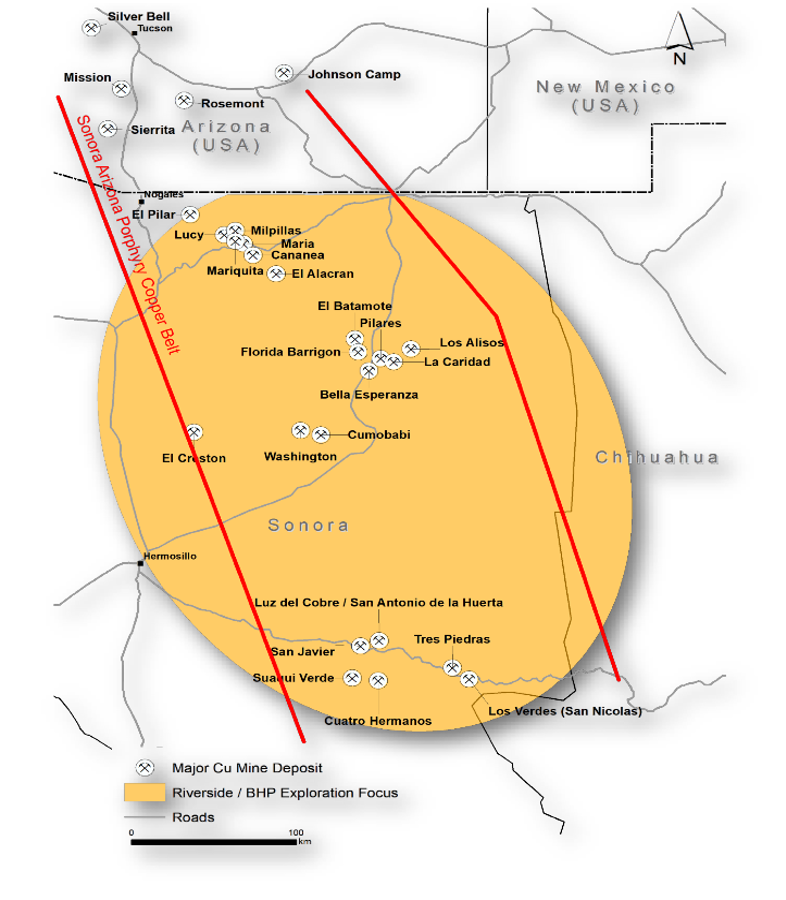 BHP will be providing Riverside with US$720,000 to commence the first half of the second year of the Program to continue to grow the portfolio of copper projects which is an increase of US$220,000 from the initial plan and better captures the investment to progress toward a Defined Project. These funds fully cover the continued generative grass-roots copper exploration and project acquisitions within the Laramide copper belt. BHP will make the following US$720,000 deposit at the next 6-month mark near the end of this calendar year. The BHP-Riverside Technical Steering Committee met last week and the program is on track and progressing with a series of properties now acquired and results coming along.

The program has been successful for the first year having identified and developed targets, acquired projects and progressing these through toward drill targeting. The first year saw Riverside bring forward a range of property opportunities and collectively acquiring large tenures with strong porphyry copper potential.

During the First year of the EFA Riverside and BHP completed extensive project reviews, data integration and acquired five (5) new properties in Sonora. These include areas around known systems, new areas based upon geochronology and other data integration. One of the highly important aspects has been the collaborative sharing between BHP and Riverside, with vast historical data and innovative new Machine Learning data integration. Riverside believes its field, tenure, access, and project area specific experience along with new collaborative Machine Learning prospective maps is leading to new ideas and opportunities for new discoveries in Sonora, Mexico.

During year 1 the funding was increased by 20% for specific refinement work on target areas that were generated from the Generative Budget and these additional working areas were evaluated effectively leading to several progressing while others were dropped to focus the team’s efforts on the highest potential opportunities. During this upcoming 2nd year of the EFA the Company expects to actively progress toward drill

During the Project Generation Phase, Riverside will act as the operator and earn a monthly fee plus 10% on internal activities and 5% on third party external contractor work with an estimated ~US$85,000/month for generative work. Riverside’s technical team will carry out generative exploration and work up targets with the aim of moving prospects toward the Project Operation Phase (II).

A prospect that is advanced to the Project Operation Phase will become a DP and will trigger a success fee of US$200,000 payable to Riverside for each prospect so advanced. BHP will fund up to US$5,000,000 for drilling and further exploration on each DP, having the option to become the operator of such DP. Riverside has the option to contribute between 10% and 20% of the exploration expenditures (“Riverside’s Contribution to Expenses”) during this phase, with BHP funding the balance (80-90%) should Riverside elect to participate. BHP may discontinue funding with respect to a specific DP at any time in which case Riverside would be entitled to 100% interest in the project and depending on the funds expended to date, BHP may retain a net smelter returns royalty interest.

Should the program advance a DP to the Joint Venture Stage, a title to the project would be transferred to a joint venture company and the parties would enter into a formal joint venture partners’ agreement. If Riverside’s cash contribution reaches a minimum of 10% in Phase (II), the Company’s deemed initial interest in the joint venture company will be 20%.

A Technical Committee (“TC”) will be formed to approve Work Programs and Budgets during Phase (I) and (II). The TC will have two representatives from each of BHP and Riverside with equal voting powers for both groups for DP’s operated by Riverside. For DP’s operated by BHP, BHP will have the casting vote on the TC.