November 26, 2019 – Vancouver, BC: Riverside Resources Inc. (“Riverside” or the “Company”) (TSX-V: RRI) (OTCQB: RVSDF) (FSE: R99), is pleased to announce the progression of the Company’s Canadian business growth model with the acquisition of the Pichette Gold Project (the “Project”) near Jellicoe, in the Beardmore-Geraldton Greenstone Gold Belt in western Ontario. Riverside’s generative exploration work in Ontario has been significant during 2019, with Pichette marking the third high-grade orogenic gold prospect generated. The work this summer at Pichette included prospecting, mapping and surface sampling of target regions traceable from regional aeromagnetic data and outcrop mapping. Pichette is located to the east of the former producing Hardrock Gold Mine (“Hardrock”). The aim of Riverside’s initial work was to expand upon the understandings derived from almost a century of mining at Hardrock. This understanding of controls on gold mineralization will allow Riverside to develop shallow, drill-ready, gold targets with the potential to host high-grades at Pichette.

The Pichette Project is located in the Vincent Township at Nezah and Canadian National Highway 11 about 60 km west of the mining town of Geraldton, Ontario. The Project covers part of the well-endowed Beardmore-Geraldton Greenstone Gold Belt region. The Vincent Township is 28 kilometers east of the Beardmore and the Leitch Mine which produced 850,000 ounces of gold at an average grade of about one ounce per ton[1].

The Company’s initial field observations and review of magnetic and other data indicate similar structure and host-rocks to those found at Geraldton might be present at Pichette. Historical drilling in the Project area focused on quartz veins and mineralization associated with geological contacts particularly between meta-sediments and meta-volcanics. Riverside has expanded targeting from processing and interpretation of magnetic data to define a series of isoclinal folds, shears and favorable geologic units which could host a significant new gold discovery.

The Geraldton region has a long and rich mining history and has produced 4.1 million ounces of gold over the past 100 years including the combined MacLeod-Cockshutt Mine, which produced 1.5 million ounces of gold up to 1970[2]. More recently, the Hardrock Project held by Greenstone Gold Mines (jointly owned by Centerra Gold and Premier Gold Mines) has elevated attention to the area by announcing their intention to mine their gold resource near Geraldton, Ontario. The Hardrock Project includes 4.3[3] million ounces gold in mineral resources of: 1.8 million measured and indicated ounces and 2.5 million inferred ounces of gold*. 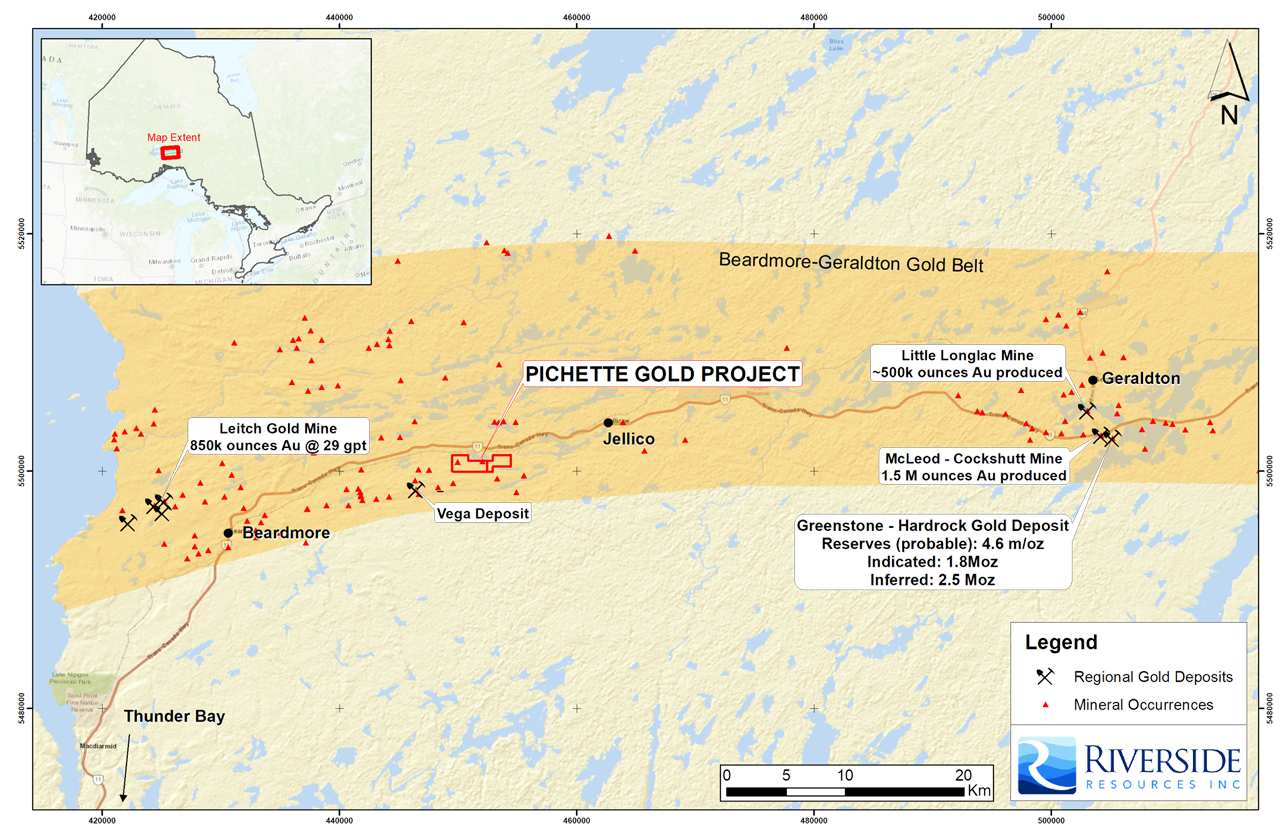 Riverside’s Exploration Work:
Riverside’s first phase of work included reviewing the historical core and old workings in addition to prospecting, mapping and sampling. The recent work confirmed two previously identified areas in addition to several new mineralized exposures. There are two predominant target orientations on the project one which trends east-west and is associated with large shears related to banded iron formation and contact zones; and a second target trend that strikes at 030 degrees northeast and is defined by smaller cross-cutting faults and/or dikes. Magnetic surveys conducted by previous operators has been helpful in outlining banded iron formation, diabase dikes and geological contacts where overburden masks the underlying bedrock. Several of the old drill collars were located in the field and the core from a 1983 diamond drilling campaign is stored in the Ministry of Northern Development and Mines core warehouse in Thunder Bay which was examined as part of the field review.

Riverside’s first-phase exploration program defined several target areas for follow-up survey work and drill target refinement (see Figure 2 below). There are several large (3m wide) shear zones defined by strongly foliated (phyllitic) material which does not appear to have been subject to past exploration. Two of these shears were noted to be located along the boundary of iron formations as at the Pichette showing and pose a highly prospective target planned for further follow-up and potential drilling. The east-west trending regional shears intersect northeast trending faults forming another area for future detailed exploration at the structural intersections similar to the high-grade gold mineralization found at the Leitch and Beardmore gold mines to the west from Pichette. 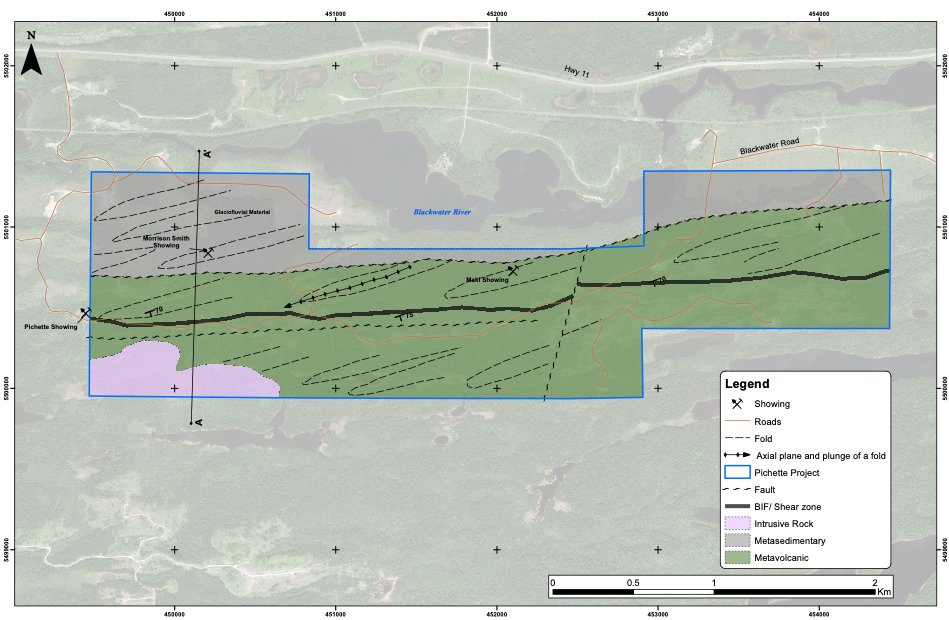 Prospectors were attracted to the area following the discovery of gold in the Beardmore and Geraldton areas in the 1930s. Assessment reports from the 1970s and 1980s indicate high-grade gold samples were collected from the Project area in the 1 ounce/ton range. Prospector reports discuss rusty quartz veins showing pyrite, pyrrhotite and arsenopyrite mineralization. Past work at the Pichette Project included a VLF, Mag geophysics surveys in addition to two trenching and two (2) drill campaigns which Riverside has now integrated into an exploration model for generating drill targets.

Two previous drilling campaigns conducted in the area of the Pichette showings found gold and indications of alteration, which will help Riverside to development of structural understanding of the project as it relates to the Hardrock Deposit. Historical drilling (1984) by Highland Crow Resources at Pichette included three (3) short, NQ-sized holes totalling 1,445 feet (440.44 m). Within these holes several brecciated quartz veins were noted at geological contact zones where gold appears associated with chalcopyrite. Another round of NQ drilling was conducted northeast of the Pichette showing in 1983. Five drill holes totaling 990 feet (301.75 m) were conducted on the Pichette Project targeting geophysical anomalies. From reviewing stored core, it appears some of the geophysical targets were graphitic zones within argillitic rock. Gold was however encountered in several of these historical drill-holes associated with iron formation units within the larger meta-volcanic packages. 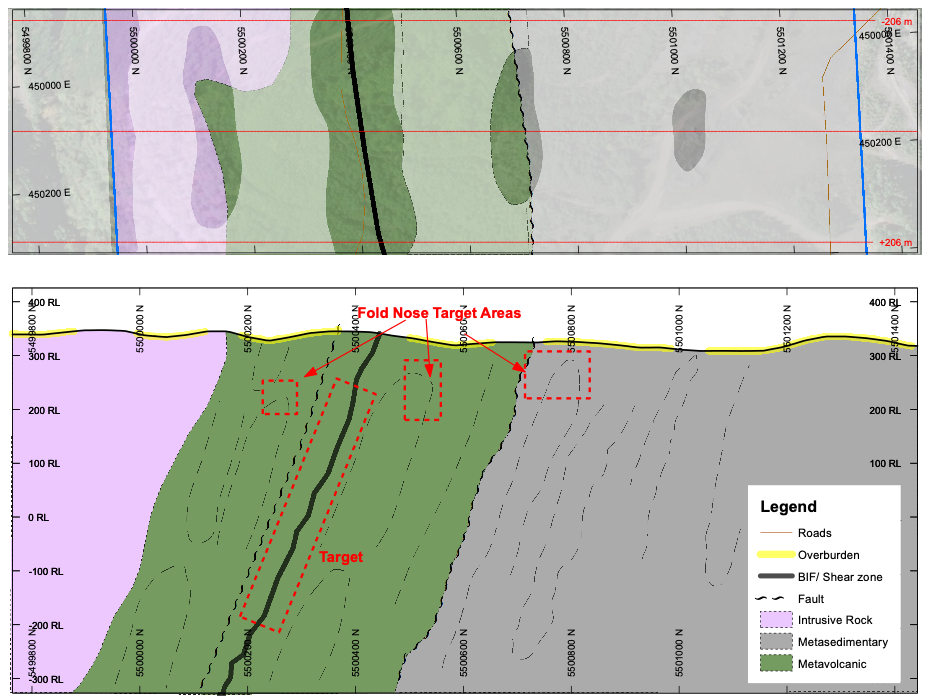 Figure 3: Generalized cross section of proposed target areas within and around the BIF/Shear zone fault and the nose of isoclinal folds

The project is underlain predominantly by east-west trending and steeply south to vertically dipping metavolcanic and metasedimentary rocks. Metavolcanic rocks consist of massive and pillowed, locally amygdaloidal, flows of basaltic composition along with related tuffaceous rocks. They are locally intercalated with coarser-grained rocks. Mafic metavolcanic rocks are fault-bounded against domains of metasedimentary rocks closer to the center of the project. The northern metasedimentary panel consists of a polymictic conglomerate and greywackes suggesting affinity with Timiskaming Formation conglomerates in the Timmins (Porcupine) Mining District.

The Pichette Project is transected by an east-west trending brittle and ductile shear zone. Deformation can be traced across the project area from the Pichette showing to near the eastern boundary. Gold mineralization is associated with strongly sheared mafic metavolcanics striking 80 degrees displaying iron carbonate, magnetite, pyrite, arsenopyrite and gold. The previously worked areas consist of banded recrystallized chert-magnetite iron formation striking east-west. Quartz veins have intruded conformably with the metavolcanics and iron formation contact and minor quartz-stringer can be found crosscutting the banded iron formation. Gold mineralization is associated with arsenopyrite and pyrrhotite.

For more information on the Project history and Geology, please visit the Pichette Gold Project page on Riverside’s website.

On November 15, 2019 the Company granted 1,265,000 incentive stock options (the "Options") to Directors, Officers and Consultants of the Company. The Options are exercisable at $0.135 per share for a period of 5 years from the date of grant. Options granted to individuals in their capacity as a Director vest in 3 equal instalments over 18 months and Options granted to Officers and Consultants vest in 4 equal instalments over 12 months. The Options were granted pursuant to the Company's shareholder-approved stock option plan and are subject to the policies of the TSX Venture Exchange and any applicable regulatory hold periods.

The scientific and technical data contained in this news release pertaining to the Pichette Project was reviewed and approved by Freeman Smith, P.Geo, a non-independent qualified person to Riverside Resources, who is responsible for ensuring that the geologic information provided in this news release is accurate and who acts as a “qualified person” under National Instrument 43-101 Standards of Disclosure for Mineral Projects.

Regarding previous historical operators work on the Pichette Project. The reliability of historical data is uncertain but is considered to be relevant by Company management as a portion of the historical sampling was resampled and verified; however, there is a risk that the Company’s confirmation work or future drill testing may produce results that substantially differ from the historical results.

About Riverside Resources Inc.:
Riverside is a well-funded exploration company driven by value generation and discovery. The Company has no debt and less than 63M shares outstanding with a strong portfolio of gold-silver and copper assets in North America. Riverside has extensive experience and knowledge operating in Canada and Mexico and leverages its large database to generate a portfolio of prospective mineral properties. In addition to Riverside’s own exploration spending, the Company also strives to diversify risk by securing joint-venture and spin-out partnerships to advance multiple assets simultaneously and create more chances for discovery. Riverside has additional properties available for option, with more information available on the Company’s website at www.rivres.com.