Riverside’s exploration team is currently in the field completing mapping and sampling work along strike of the known vein system and believes there is also great potential to identify new veins across the greater property package. Riverside has not yet performed any exploration work at the property and looks to begin a program in the near future to confirm historical results.

In January, 2020 Riverside collected a total of 16 rock samples from selective areas from its first sampling program at the Project with six (6) of the samples returning greater than 5 g/t Au and up to 25.7 g/t Au and 119.7 g/t Ag (see Table 1 below). Riverside’s exploration team mapped and re-sampled known historical work areas to validate the accuracy of the high-grade samples collected in the past and to initially confirm two of the primary targets; Santa Rosalia and Santa Rosalia Sur.

Riverside has identified three (3) primary targets at the Los Cuarentas Project; the Santa Rosalia target, the Santa Rosalia Sur target, and the El Sombrero target. Riverside geologists will focus their initial efforts towards the Santa Rosalia target utilizing past data to refine the target area and work program. The Company is also working on interpretations of the structural control of the high-grade ore shoots to better understand and delineate the volcanic-hosted, low sulfidation veins found on the property.

The historical mine area can be accessed via old shafts and adits. The high-grade samples taken by Millrock Resources in 2018 of 5 g/t Au and up to 17 g/t Au within structures makes this an intriguing exploration target. The Santa Rosalia target shows clay alteration with inward zoning of silicification grading into a well-defined silicified vein structure and is a priority for drill discovery. Previous mapping, sampling, underground work and other research studies of the historical mine operations include: Santa Rosalia Mining, Centerra Gold, Paget Minerals, and the Mexican Geological Survey providing a wealth of data for targeting and drilling.

The Santa Rosalia mineralized zone consists of multiple sub-parallel gold-bearing low sulfide quartz veins following an east-west trend called the Santa Rosalia Mine fault. This fault extends for approximately 1 km where gold values are significant and open. Flexure of the Santa Rosalia Mine fault and fault intersections host high-grade gold bearing veins and breccia shoots. Those well-developed structural zones are typically 1 to >3 m in width and as large as 8 metres in width, where Riverside’s sample returned 25.7 g/t Au in vuggy quartz vein and 5.3 g/t Au in the vein-bounded stockwork. The vein material at surface shows evidence of hydrothermal boiling with bladed quartz after calcite.

Historical workings from the 1950’s immediately south of the Santa Rosalia Target comprises vertical stopes from surface that extend down 230 metres (see Figure 3 in Diagrams) and are interpreted to be continuous for over 200 metres along strike from the field mapping.

Santa Rosalia Sur target is located southeast from the historical Santa Rosalia mine area and has been a focus for recent exploration by Centerra. Centerra conducted an IP survey, detailed soil geochemical survey, detailed rock sampling and geologic mapping. The IP was conducted by Zonge Geophysics in December 2016. The Santa Rosalia Sur target comprises a well-defined 800 m long, structural zone that has been mapped and sampled for alteration minerals (Terraspec) for vectoring and targeting.

Santa Rosalia Sur is characterized by a well-defined 800 m long strike structural zone showing evidence of hydrothermal alteration (see press release September 11, 2019). The mineralized system outcrops on top of a reddish hill with a rhyolite dome similar to key mining districts in Mexico and the structure is a sheeted set of shallow dipping veins hosted in clay altered andesitic to dacitic rocks. The observed mineralization consists of stockwork, hydrothermal breccias and sheeted quartz veins formed by a multistage silica filling with near-boiling level textures such as banded quartz veins and commonly moss and lattice textures.

The mineralization extends at surface for at least 50 metres along a northwestern trend is 30 m in width and demonstrates high-grade gold samples averaging 1.8 g/t Au. Two samples within sheeted veins located 25 metres apart returned 1.9 and 6.8 g/t Au from 1 m channel samples (see Figure 4 in Diagrams). Historical results returned multiple high-grade samples in the same area up to 14.8 g/t Au. The outcropping vein zone is bounded to the south and to the east by post-mineral faults leading to possible vertical displacement of the mineralized body.

Santa Rosalia Sur encompasses a dozen small old workings. Most of them are located along the northern end of the hill and target high-grade sheeted veins. The extent of the old workings are not currently known.

At El Sombrero target the alteration is very extensive showing silica caps indicative of high-level boiling zones within an epithermal system. The El Sombrero target is located E-SE of Santa Rosalia Sur and comprises altered andesites, dacites and agglomerates. This alteration in conjunction with Centerra Gold’s geochemical soil survey and selected rock chip samples has delineated this region as a third priority target.

As initially described in Riverside’s press release dated September 11, 2019, the alteration is very extensive and shows higher temperature alteration minerals such as dickite, pyrophyllite and kaolinite. The highly silicified cap and the high-level boiling alteration mapped at El Sombrero extend along an E-W structural trend called the El Sombrerito, which constitutes a target at depth and further work during early 2020 is now beginning to document the expansion potential.

The area to the west of the primary targets has seen limited exploration. Historical results sampled by Millrock in 2017 and 2018 returned some of the highest grades at the Los Cuarentas Project overall, including a rock-chip sample of 16.5 g/t northwest of El Sombrero and a float sample returning 29.4 g/t Au and 149 g/t Ag along a structural zone parallel to the south of Santa Rosalia. Early exploration is highlighting structural intersections that could lead to high-grade gold deposition.

Additional mapping and structural analysis will be conducted at the El Sombrero target along with further sampling of the mineralized trend to provide validation on the high-grade gold historical results. The ongoing work will also prioritize drill targeting over Santa Rosalia and Santa Rosalia Sur, which will confirm extension of mineralization at depth. 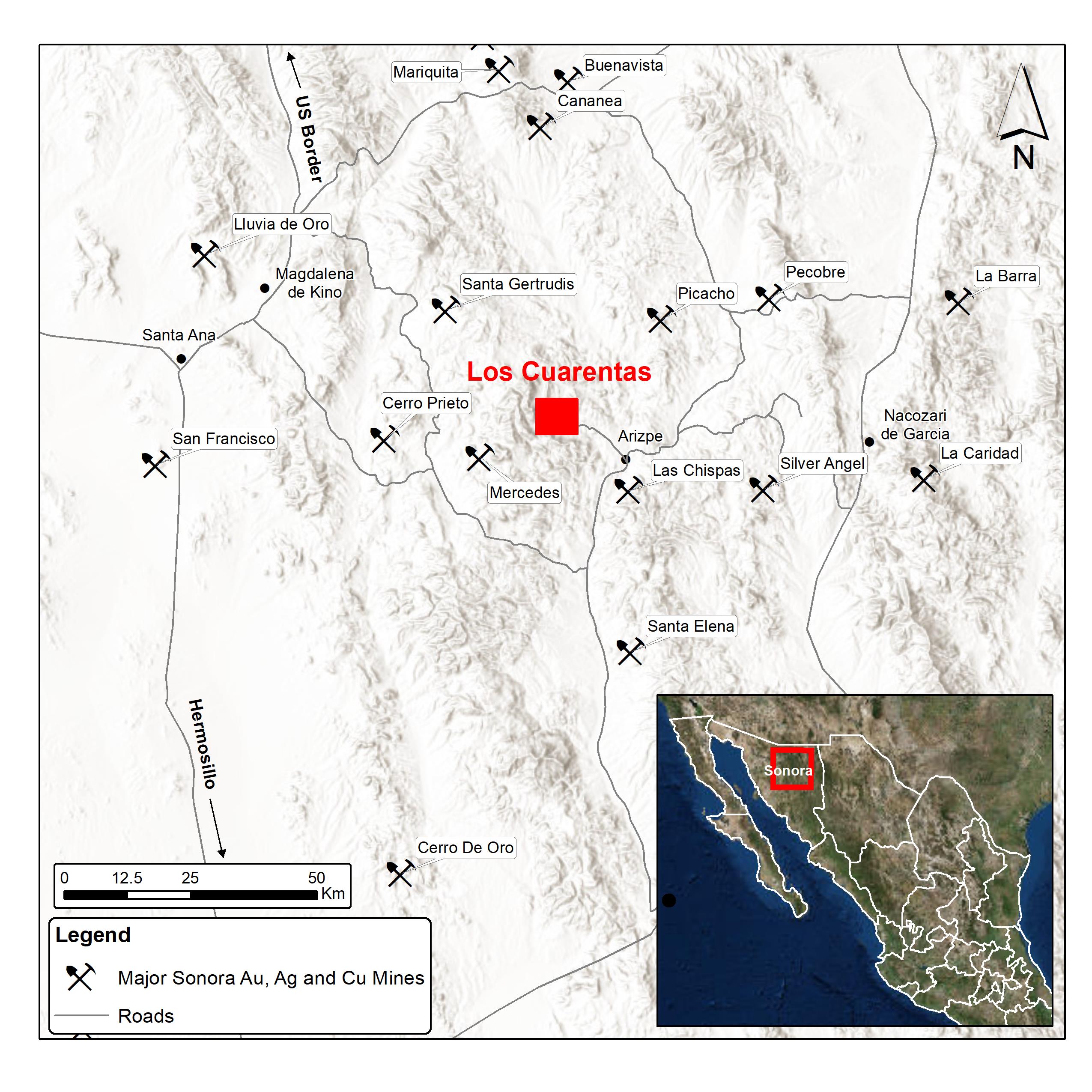 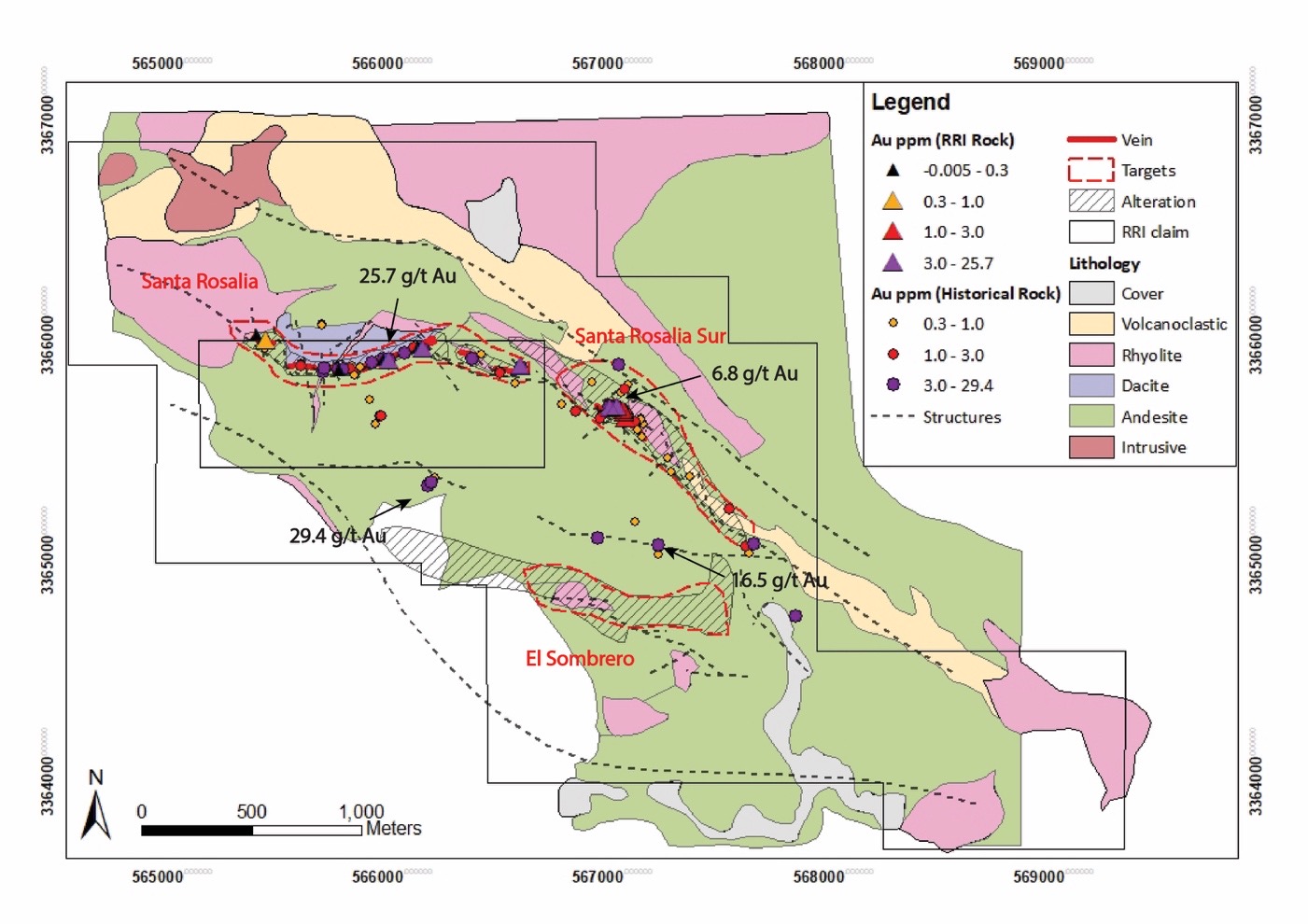 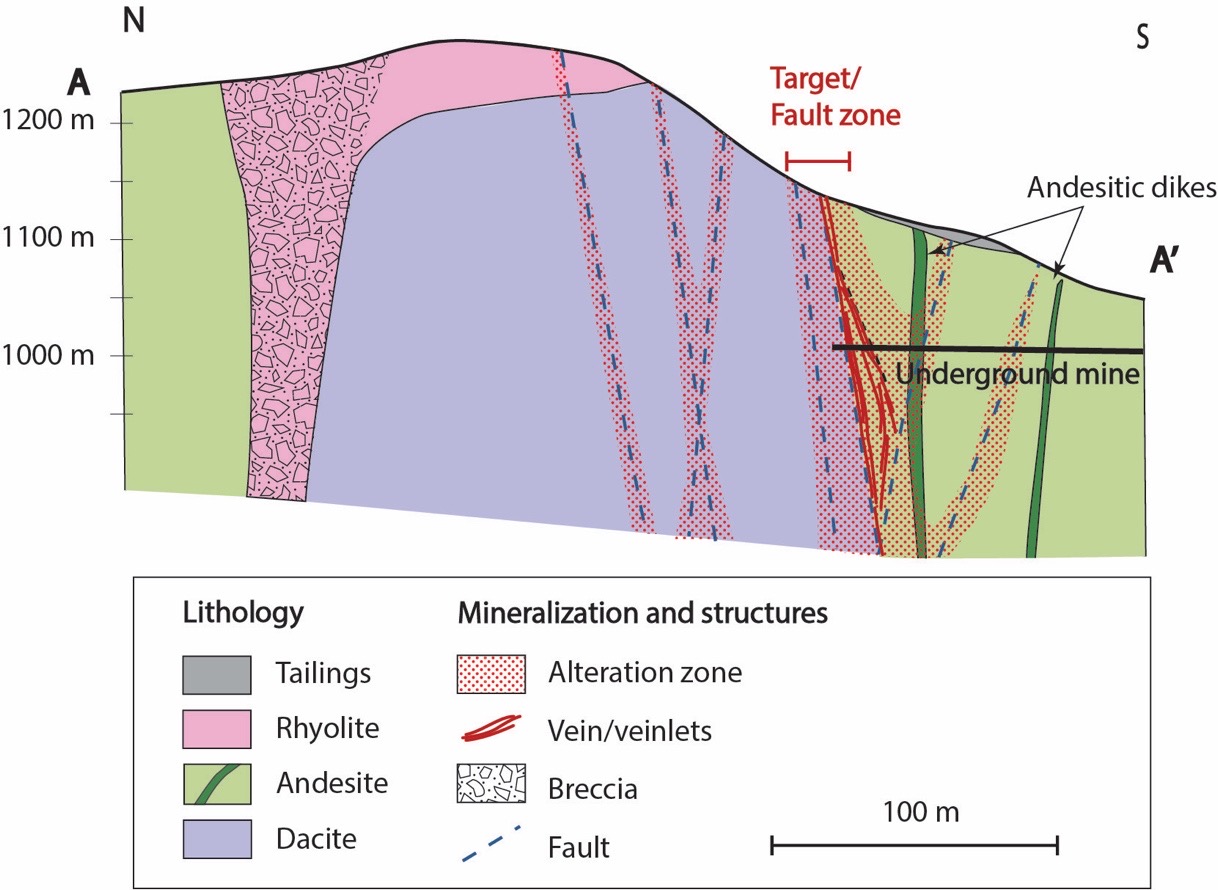