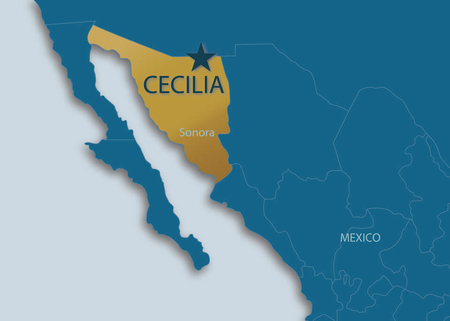 The Cecilia Project is a district scale gold and silver low sulfidation epithermal system centered on multiple mineralized rhyolitic flow-dome complexes. Mineralization is related to structures of N30W and N70E with high grades assayed at the intersection of these structures. One of the workings at the Cerro Magallanes dome returned high grades up to 133.7 g/t Au and 335 g/t Ag. In addition to the rhyolite domes the underlying sedimentary Cabullona group and Paleozoic limestone provide an environment for replacement style mineralization at depth. Riverside’s current analogues for Cecelia are SSR Mining’s Pitarrilla deposit and Fresnillo’s San Julian deposit, which contain 526 million oz Ag (Measured + Indicated 1) and over 230 million oz Ag respectively.

The Cecilia Project is located 40 km southwest of the Mexico-U.S.A. border town of Agua Prieta in Sonora, Mexico. The project is directly accessible by well-maintained dirt road from highway 17.

As many as 30 abandoned exploration adits, small underground galleries and surface prospect pits are distributed over the upper slopes of Cerro Magallanes, which are believed to date back to the early decades of the 20th Century.

In the early 1980s the Consejo de Recursos Minerales (CRM) initiated a project at Cerro Magallanes over a 3-year period and carried out a comprehensive exploration program, including:

In April of 1994, Cambior Exploracíon entered into an option-to-purchase agreement with the Mines General Directorate (DGM) for the project. Cambior terminated the contract at the end of the first 18-month term, their work is summarized below:

Minerales El Prado S.A. de C.V., the Mexican subsidiary of Chesapeake Gold Corp., was the next company to acquire the project. El Prado conducted rock sampling programs between 2004 and 2009 and collected a total of 738 surface rock chip samples. From 2009 until 2013 essentially no work was done.

Recent addition of 1,801 ha to the Cecilia Project land package has expanded work possibilities and discovery of new targets to the east.

Nineteen (19) of the 91 samples have silver contents greater than 100 g/t Ag, six of these samples yielding assays that were greater than 200 g/t Ag and the maximum silver assay was 310 g/t Ag.

In September of 2018, Riverside completed a regional soil sampling program. The soil survey covered approximately 30% of the 50 km2 Cecilia 1 concession (see Figure 2 below and press release dated March 5, 2018), and has expanded the targeting around the known central Cerro Magallanes area of the Cecilia Project. The Company continues to advance and refine the known central targets and is also placing equal priority on new property-wide target generation. 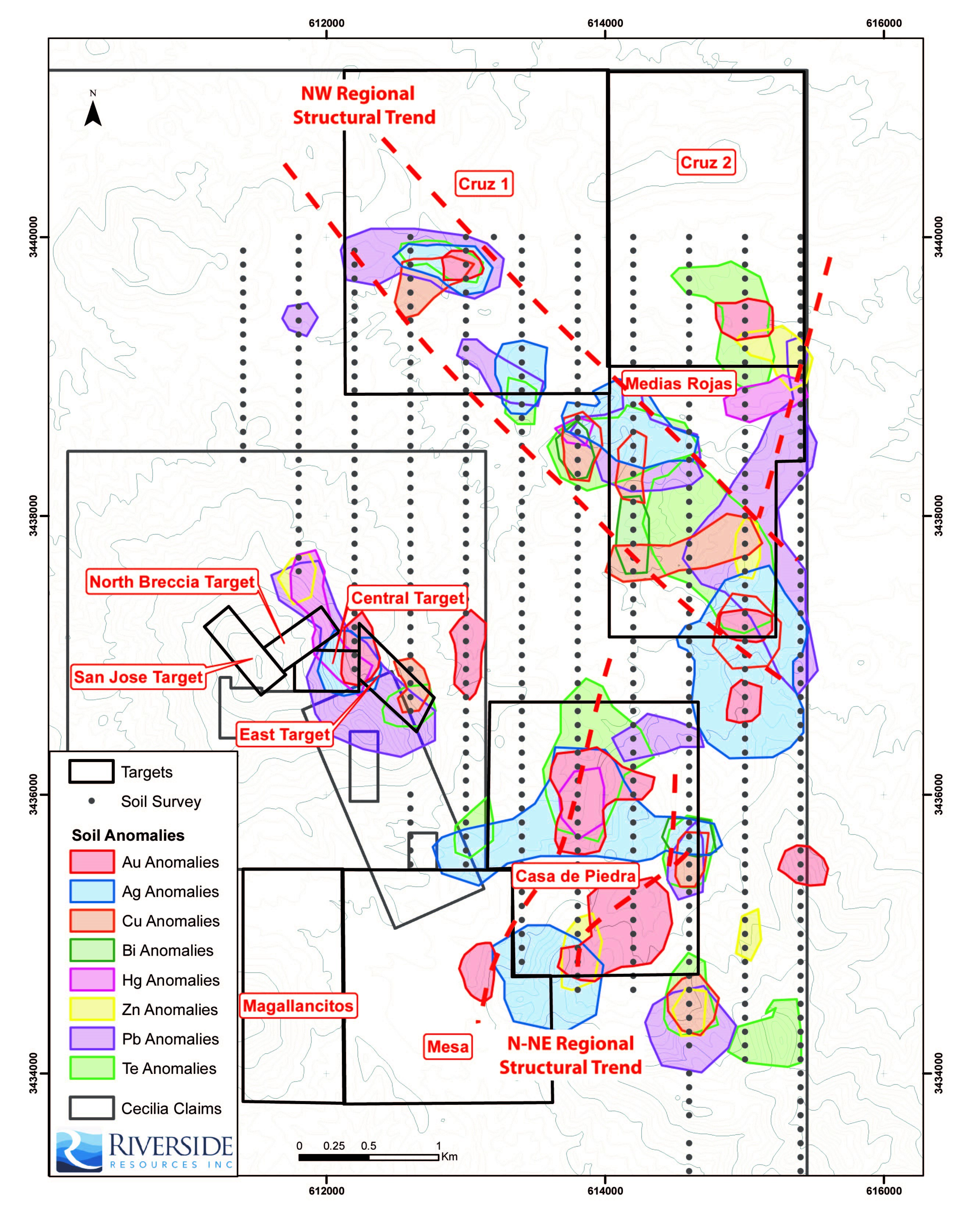 In October 2018, Riverside reported on rock chip channel samples from the Cerro Magallanes area continuing to expand exploration to different regional areas at the Project (see press release dated October 2, 2018). Riverside’s rock sampling results from the main central rhyolitic dome complex verifies and expands upon historical sampling for gold within breccias and veins on Cerro Magallanes. Dome margins also show positive potential for near surface gold targets. This channel sampling program included 305 samples returning assays ranging from <0.05 to 19.0 g/t Au. Sampling shows consistent gold from the top of Cerro Magallanes (2200m) at the San Jose Target downslope to the northeast to the Agua Prieta-North Breccia Target and through to the Central and East Target (1760m) areas.

Results across the Cecilia 1 concession shows significant upside, with high-grade samples at Medias Rojas up to 12.5 g/t and a 2-m channel sample assaying 2.3 g/t at La Mesa Target. Similar to Cerro Magallanes, mineralization follows primary northeast and northwest trending structural lineaments for which the intersection serves as an excellent migration path for gold-bearing fluids.

Gold mineralization is concentrated along NW and NE regional structural lineaments. Riverside Resources identified four targets on the Cerro Magallanes dome and six others outside of the dome. All of them show extensive alteration and sub-continuous high grades. Surface geochemistry indicates that that the areas sampled are above the boiling zone suggesting gold bearing mineralization could be intersected at shallow depth at these targets. 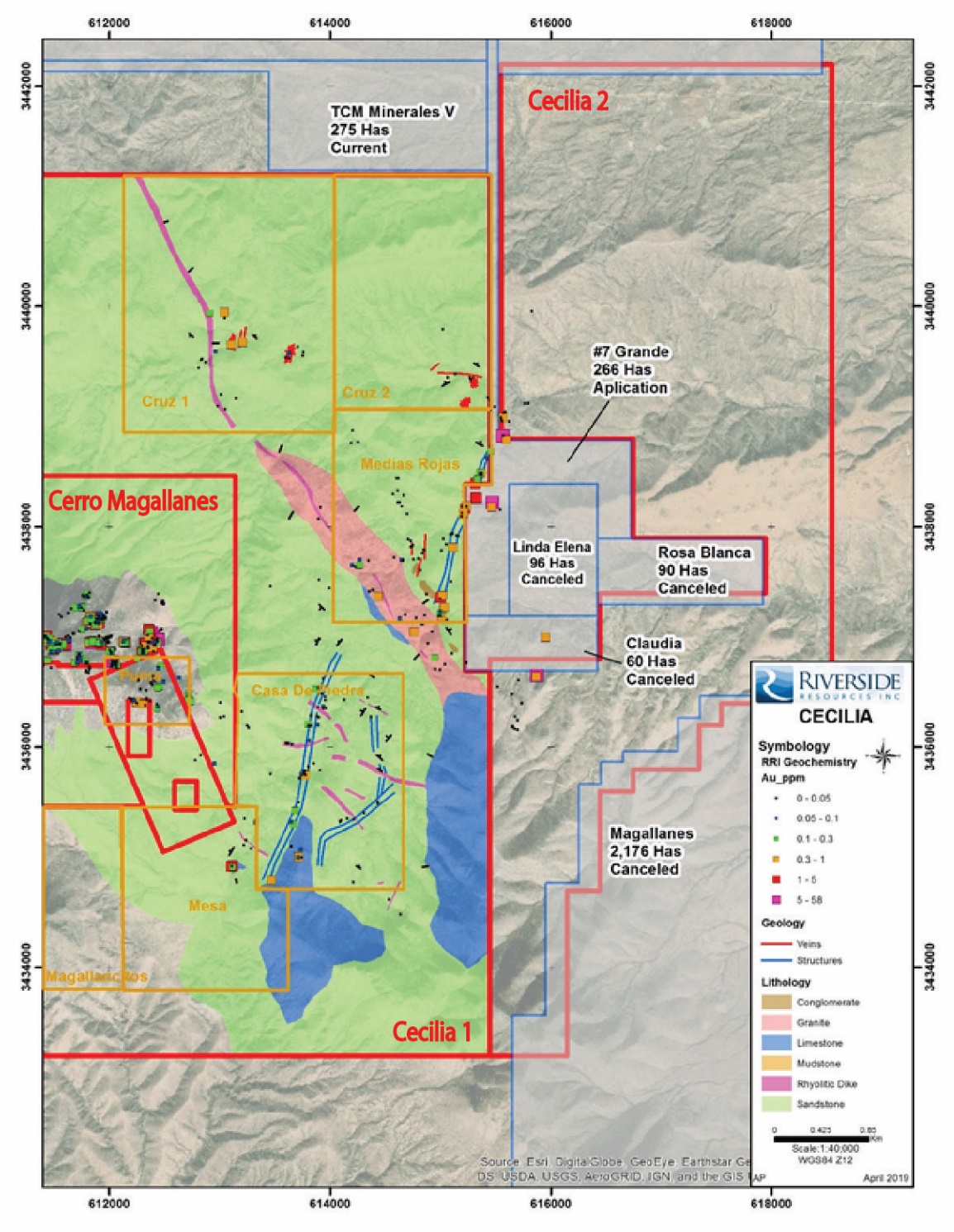 Cerro Magallanes Dome encompasses four sub-targets: San Jose, North Breccia, Central Target and East Target (Figure 4). Riverside’s extensive work program since 2017 have shown a vertical variation with significant concentration of Ag at the base of the dome along the eastern slope to gold-only enriched at the top of Cerro Magallanes. Three specific elevation: 1,700 m, 1,900 m and 2,100 m comprise most of the high-grade, which suggest multiple mineralizing events within specific structural settings, along dome margin and stratigraphy. This style of mineralization is very similar to the Pitarilla mine in Durango, where large volumes of mineralized rock can be found in addition to high-grade structural bounding margins. This hypothetic target at Cerro Magallanes would be at 300 to 500 meters depth from the top of the dome, evident by the presence the Cabullona sediments outcropping at 1,650 m elevation on the eastern slope. 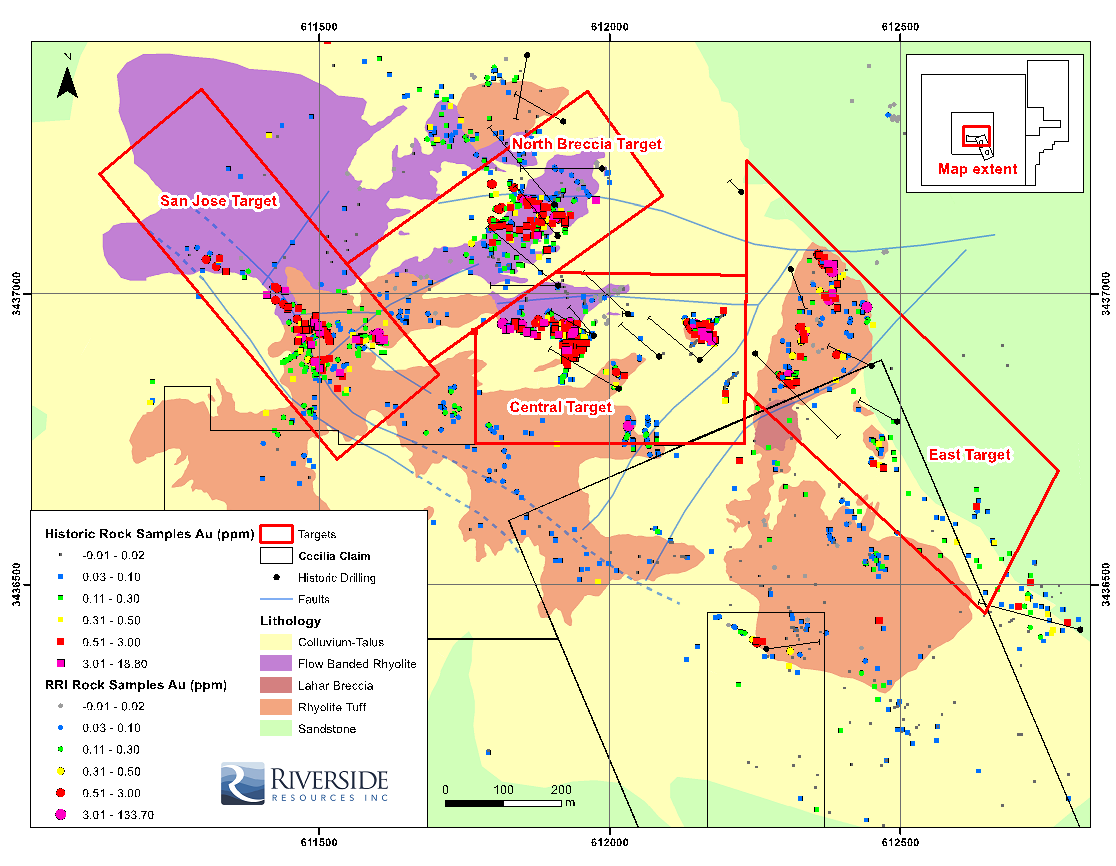 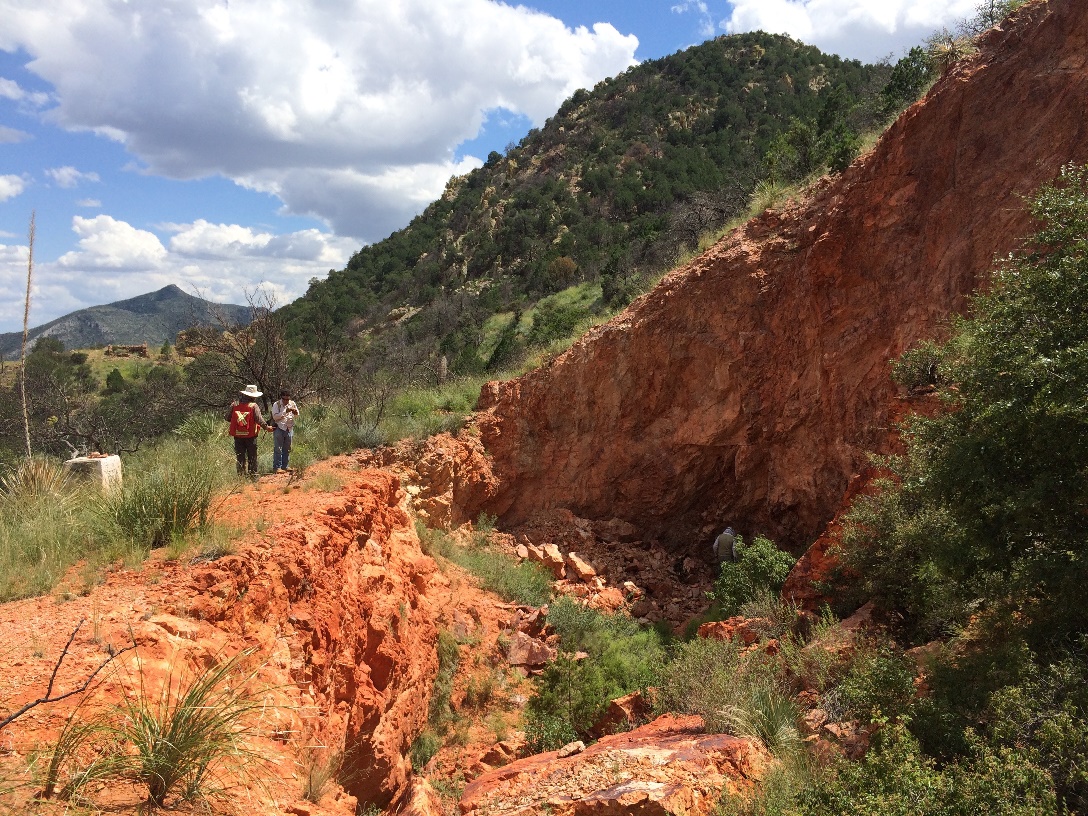 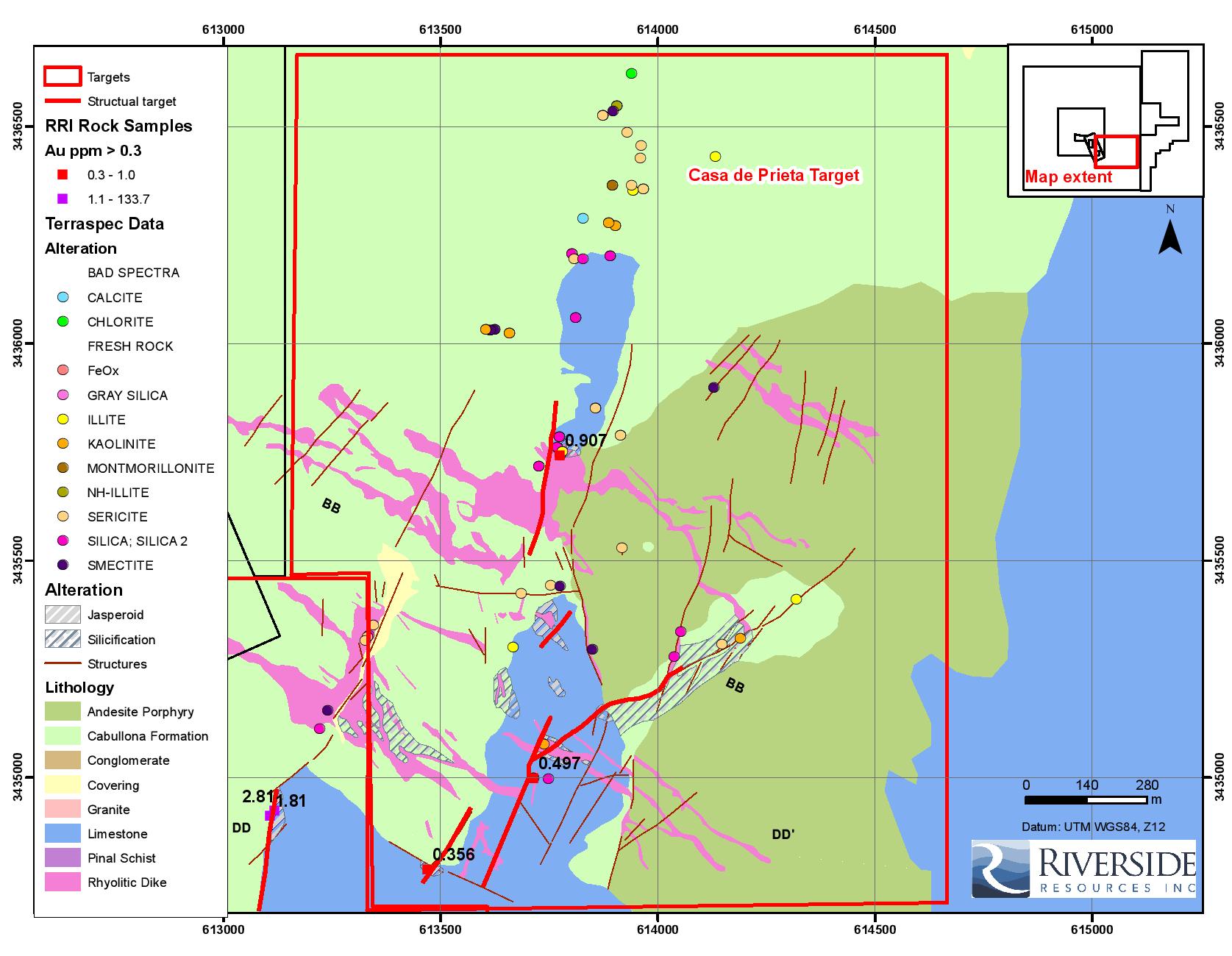 Examples of breccia and veining within the Medias Rojas structural corridor.

In January of 2017, Riverside Resources Inc. purchased the Violeta concession from Millrock Resources Inc. for C$10,000, 100,000 Riverside shares and by granting Millrock a 0.5% Net Smelter Return royalty. Riverside concurrently signed an option to purchase agreement with Gunpoint Exploration Ltd. to acquire a 100% interest in the three Cecilia-Margarita concessions by making the following cash payments and share issuances:

The Cecilia-Margarita concessions are subject to a 1% NSR royalty in favour of the Servicio Geologico Mexicano (formerly Consejo de Recursos Minerales).

Riverside has compiled historical sampling and drill-hole data and has begun defining future drill targets. Fieldwork in 2018 has confirmed the existence of large regional northwest trending faults that service as conduits for mineralizing fluids. The larger northwest trending faults are intersected by smaller northeast and east-west structures which serve as areas of deposition for the rising gold bearing fluids. These complimentary structures have been mapped by Riverside and outlined by recent soil sampling surveys. Riverside’s 3D model of the litho-structural setting and the controls on the Cecilia mineral system shows a relationship of rhyolite dome-related polymetallic ore systems providing high-potential drill targets at various levels in the gold-silver mineral system, including targets that are not readily apparent in bedrock exposures found at surface.

The scientific and technical data contained in this outline pertaining to the Cecilia Project was reviewed and approved by Freeman Smith, P.Geo., a non-independent qualified person to Riverside Resources, who is responsible for ensuring that the geologic information provided in this news release is accurate and who acts as a “qualified person” under National Instrument 43-101 Standards of Disclosure for Mineral Projects.