The Longrose Project is in the Beardmore-Geraldton Greenstone Belt (BGGB) which is located along the boundary between the Wabigoon and Quetico sub-provinces in the Superior province of the Canadian Shield. The belt has been subjected to three structural events. The second event of regional folding and shearing is often found to control mineralization. On the Longrose property mineralization is found within large shear zones that parallel the east-west trend of the belt and within fold structures. Historical gold mines and current gold exploration camps are located throughout the Beardmore-Geraldton Greenstone Belt. The belt is highly prospective with most mines being in associated with structures.

The region has a long mining history and has produced 4.1M ounces of gold production. One of the larger past-producer was the MacLeod-Cockshutt Mine which produced 1.5M ounces of gold. More recently the Hardrock Project held by Greenstone Gold has outlined mineral resources of 1.4M ounces gold in measured and indicated; and 1.36M ounces gold in the inferred categories. The Longrose Project is adjacent to The Leitch Mine, a high grade past producer: 920 thousand tons at 0.92 ounces/ton producing roughly 850 thousand ounces of gold.

The Project is located 7 km west of Beardmore Ontario and can be accessed by 2-wheel drive vehicle off Highway 11.  Beardmore is a two-hour drive north from Thunder Bay a major city of 120,000 people.  The location has excellent access and is close to infrastructure; TransCanada Highway #11, natural gas and hydro. This infrastructure allows for year around access for survey and drilling programs. 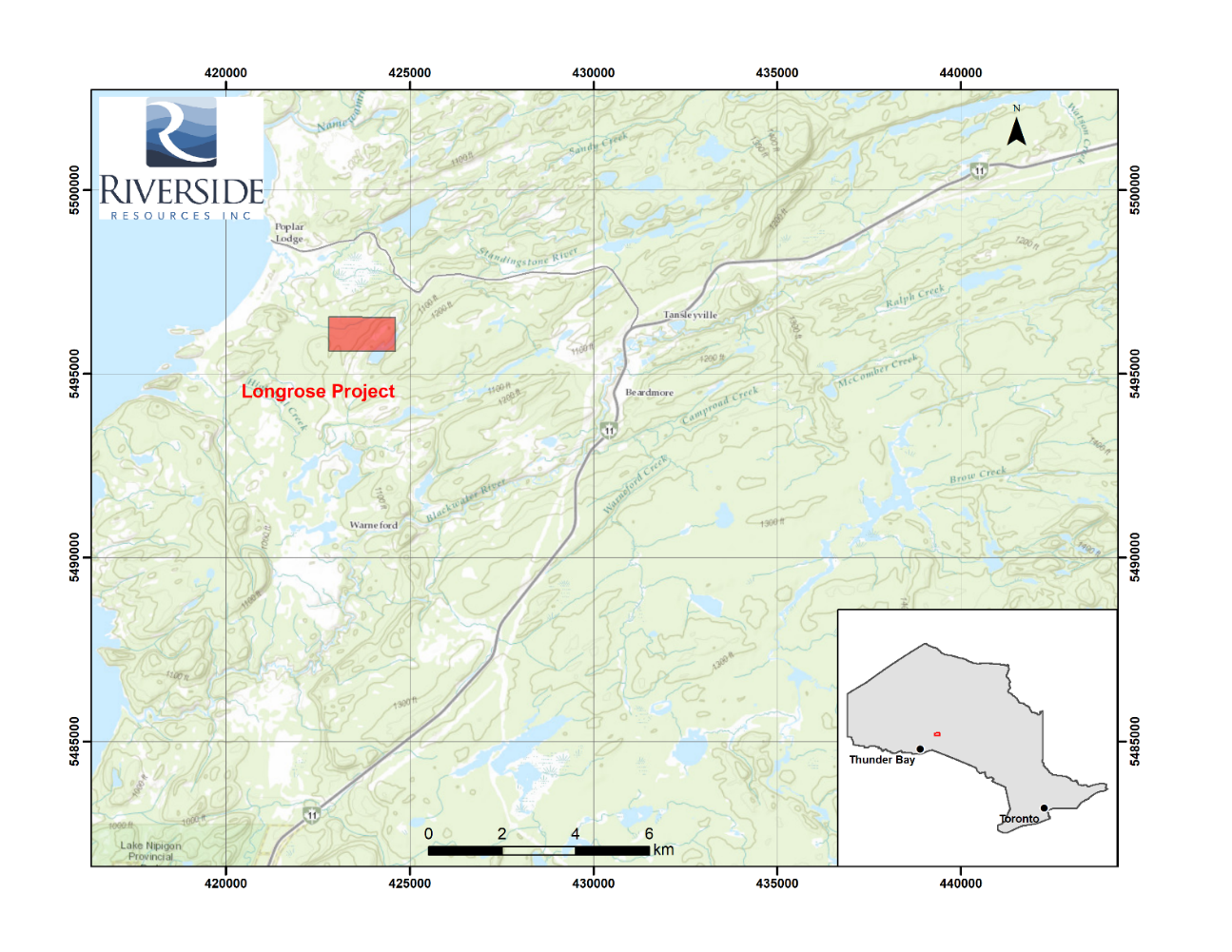 The region has a long mining history and has produced 4.1M ounces of gold production over the past 100 years. One of the larger past-producers was the combined MacLeod-Cockshutt Mine which produced 1.5M ounces of gold. More recently the Hardrock Project held by Greenstone Gold Mines (jointly owned by Centerra and Premier) has elevated attention to the area by announcing their intentions to mine their project near Geraldton, Ontario (east of Longrose on Highway 11). The Hardrock project mineral resources include: 1.4M ounces gold in measured and indicated; and 1.36M ounces gold in the inferred categories.

In 1947 Longrose Gold Mines drilled 18 short, AQ-sized diamond drill holes totally about 2000m. These short holes appear to have been testing structures associated with the nose of folds along the margins of banded iron formation (BIF). Mineralization within the historical holes indicates narrow, high-grade intercepts at BIF contacts. Diamond drill hole 47-17 was drilled to a depth of 157 ft (48m) and was collared on BIF. Logs record sedimentary bedrock showing alteration and silicification for about 27m down hole. Only the quartz veins were sampled returning assays of 1.1 to 1.7 grams per ton, outlining a significant interval of mineralized rock. Diamond drill hole 47-12 along strike, west of DDH47-17 drilled the same BIF unit and also retuned narrow, high-grade gold intercepts. From near the top of the hole, at 36 feet (11m), to the bottom of the hole at 711 feet (216.7m) drill logs record altered greywacke and quartz veining with lean banded iron formation again only the quartz veins were sampled. One 0.5-foot vein returned 0.9 ounces per ton (~25.5 g/t). The interval from 34.5 m to 54.6 m records 4 veins within greywacke and banded iron formation and having significant pyrite and pyrrhotite. The veins sampled in this interval returned values between 0.6 and 1.7 g/t outlining a 20m wide target at/or near surface. Similarly, another east-west trending structure extends westward from the Lake Nipigon South showing (east of the claims) toward DDH47-01 and may extend still further westward drill holes UND-01 and UND-03 (1998). While there is not enough data to know if the mineralized intercepts in these holes are the same structure are they are on the same trend and form a exploration target. (Figures 5 & 6).

The alteration, metamorphism and sulfide mineralization that is commonly present within the Beardmore region is similar to the geology at the gold operations and previous mines at Geraldton and at Greenstone Gold. The belt is highly prospective with most mines being associated with structures. The belt has been subjected to three events. The first event D1 (pre-mineralization) involved isoclinal folding resulting from thrusting; the second, D2 event involved regional folding and shearing. The final, third event D3 involved regional transpression resulting in steeply dipping regional cleavage. Both folds and the shearing of the D2 event are parallel to the trend of the belt and overprint D1 folds. The D2 event is the most important event.

Geology within the Longrose project comprises metasedimentary bedrock (greenschist facies) primarily meta-sandstone or meta-siltstone, (greywacke) which is weakly to moderately foliated. Other units include: meta-conglomerate (Figure 2) which is strongly foliated, polymictic, with boudin-like quartz relics, which are most likely the granite clasts from the conglomerate or possibly earlier stage quartz veins which were elongated. Conglomerates are typically a good host rock for Archean gold deposits.

The project area is mapped as having been subjected to at least two phases of folding which now lie recumbent (on its side) as is evident in the BIF unit exposed on the access road (Highway 580), beside the historic Leitch Gold Mine, see Figure 4. The metasedimentary package within the project also includes a banded iron formation known as the Southern Iron Formation.

Mineralization at the Longrose gold project is associated primarily with shear zones that are often silicified and strongly foliated. Sulphides include pyrite and pyrrhotite and occasional arsenopyrite, chalcopyrite is rare. The Leitch Mine to the immediate northeast produced 850k ounces gold up until the 1960s.  Five other deposits/showings are located along the Southern IF to the east, toward Geraldton Ontario.

The Longrose project is located within the broader productive and highly mineralized BGGB where several high-grade mines with average grades well above 15 g/t gold are noted (4.1M ounces of past production). The current targets at Longrose has this type of tenor and upside along strike for both banded iron formations and pyrrhotite rich shear zones (magnetic high features and shear zones with sericite and magnetite destruction show clearly as breaks in the broader magnetic fabric).

The scientific and technical data contained in this news release pertaining to the Longrose Project was reviewed and approved by Freeman Smith, P.Geo, a non-independent qualified person to Riverside Resources, who is responsible for ensuring that the geologic information provided in this news release is accurate and who acts as a “qualified person” under National Instrument 43-101 Standards of Disclosure for Mineral Projects.