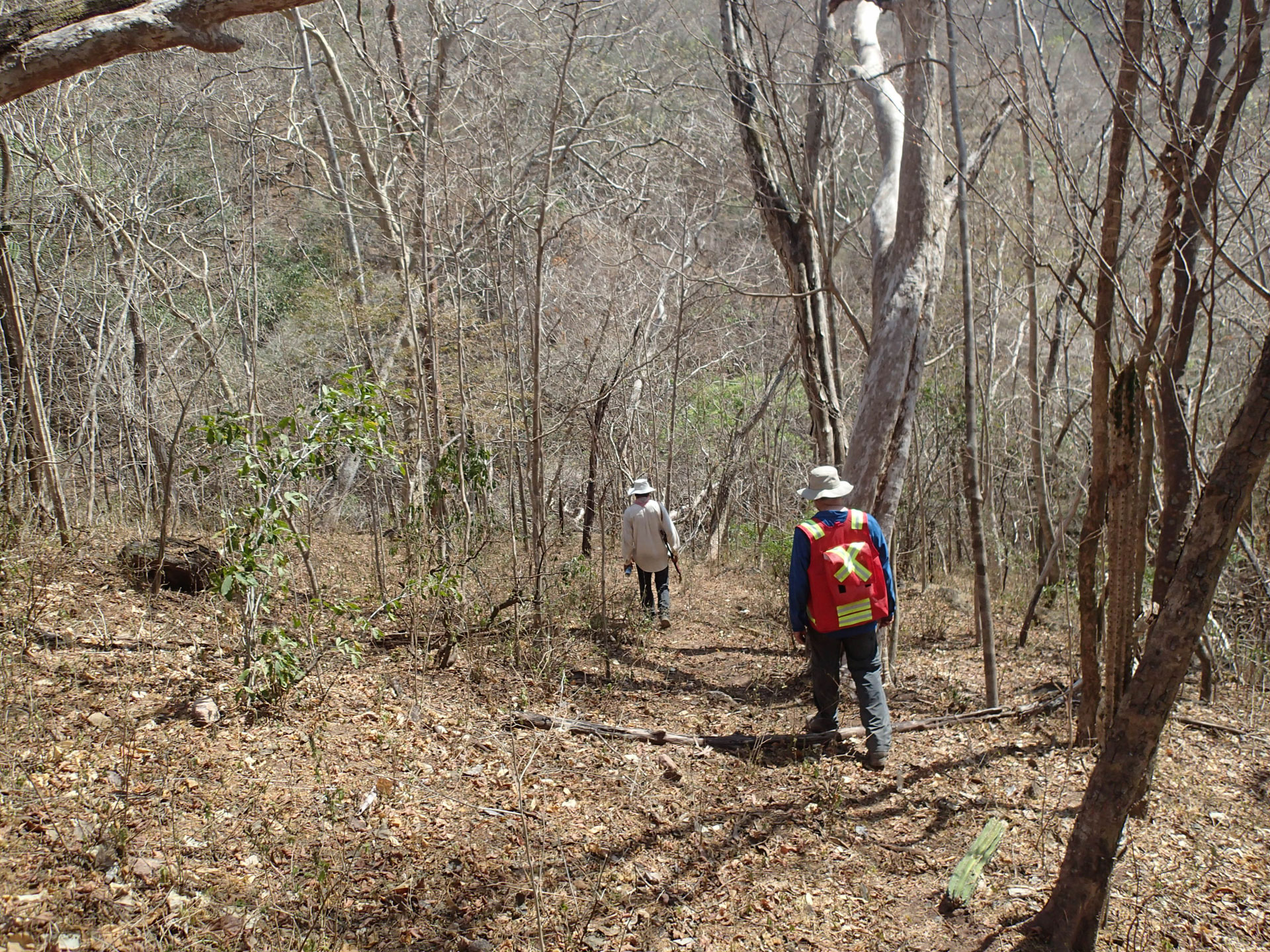 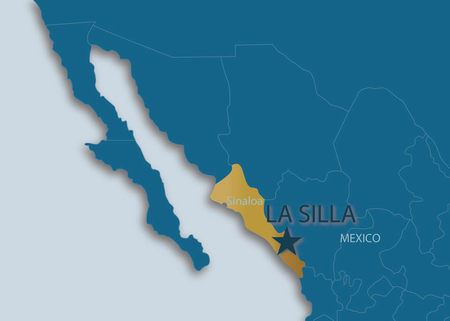 The La Silla epithermal Au-Ag project is similar to the San Dimas (Primero Mining Corp.) and El Gallo (McEwen Mining) vein systems being mined to the south and north of La Silla.  The project is located 60 kms northeast of Mazatlan with paved and dirt road access to the 20 km square property.  The project is located in the Ollitas Mining District, Municipality of San Ignacio, State of Sinaloa, Mexico.   The closest population and commercial center to the property is the town of San Ignacio, with good infrastructure.  From San Ignacio, which lies about 20 km north-northwest of the core of the property, the property’s main prospects are accessible by following a rough bush track to the southeast to the hamlet of La Morita and then north.  Exploration work in the Ciruelos areas was conducted while staying in the town of San Ignacio.

The La Silla Property consists of 2,070.78 has hectares, contained on five exploitation concessions 100% owned by Riverside Resources Inc. and is available for option.

In June of 2018 Riverside geologists collected 52 chip, channel and grab samples over the past month during a focused exploration program with assay results ranging from <0.05 up to 19.9 g/t gold and from <0.05 up to 200 g/t silver. Five of the samples returned greater than 1 g/t gold (see Table 1 below for highlighted samples). The new sampling program appears to have extended the strike length of known veins, while also identifying new vein structures at the La Silla Project (see Figures 1 & 2 - Ciruelo Map & Ciruelos Cross-Section in Diagrams).

The La Silla property is situated in the western foothills of the northwesterly trending Sierra Madre Occidental mountain range that extends through northwestern Mexico.  The oldest rocks found in the district, generally occurring at elevations of 200 masl or less, are Late Cretaceous to Early Tertiary plutonic rocks ranging in composition from diorite to granodiorite.  Overlying the massive and medium-grained intrusive rocks is a sequence of andesite to rhyolite volcanic rocks considered to be broadly coeval with the underlying plutonic rocks.  This volcanic sequence is conventionally referred to as the Lower Volcanic Series (LVS) and on the La Silla property it is represented by two main rock packages: a lower andesite package that is unconformably overlain by a thick sequence of variably welded dacite tuff and dacitic lithic tuff.  The gold-bearing breccia structures and epithermal veins that have been drill-tested on the property are generally localized along the contact between the lower andesite package and the upper dacite sequence of rocks.

Following the deposition of the LVS, the region hosting the Ollitas mineral district underwent extensional tectonism that resulted in the volcanic pile being faulted into blocks that rotated to the north and to the southwest.  It is this tectonic event that generated the prominent E-W to ENE-WSW structural trend which is reflected by the district’s vein systems and intrusive dikes.  Later, in the Late Tertiary, the region was affected by a second extensional event that formed numerous NW-striking, moderately to steeply dipping normal and strike-slip faults which offset certain veins by distances of 10’s of meters to a few hundred meters.

The quartz veining that is developed within the dilatant structures shows features that are characteristic of formation in the epithermal low-sulphidation environment.  Thin banding of chalcedonic and sugary quartz is common and clear or amethystine cockscomb quartz is regularly present in the veining. Boiling is probably the most important mechanism for gold and silver precipitation in low-sulphidation epithermal ore systems.

A vein paragenesis at La Silla comprises the following:

Stage I veining, particularly that which is marked by greenish quartz, hosts significant gold and silver mineralization.  Structures that have relatively high concentrations of Stage II, III or IV silica typically show low Au and Ag grades due to the dilution effect of these later stages of veining.   As is typical for low-sulphidation vein systems, hydrothermal alteration of the La Silla wall-rocks tends to be limited to vein ‘halos’ that rarely extend more than a few meters from the vein margins and are not uncommonly only tens of centimeters wide.  Silicification is the most prominent alteration type at La Silla and tends to be more strongly developed in the hangingwall dacite lithic tuff unit.  Argillic alteration of the dacite lithic tuff is more widespread in the area of the property, but its relationship to the auriferous quartz veining is unclear.  It is possible that much of the argillic alteration displayed by the dacitic tuff is simply a product of supergene processes, including weathering.

The El Roble vein zone can be traced on surface for approximately 350 meters, following a N25 west trend. Although the two main vein outcrops dip 70°NE, interpretation from drill hole intercepts suggest the main vein may be dipping as shallow as 35°NE, making it an open-pit target for further drill testing.  The vein is hosted both within andesite and a porphyritic diorite dike or sill.  A second less defined vein zone, El Roble Oeste, outcrops approximately 30-50 meters west of the El Roble vein, following the same general trend.

The El Roble Vein has been explored by a number of surface pits, one collapsed shaft (reportedly 40 meters deep) and one crosscut tunnel (also collapsed).  No production is recorded, although the remnants of a mill site have been preserved near the current house site, with at least two “tounas” for the crushing of ore. The character of the El Roble Vein at surface is fairly distinct for the district, being composed of mostly white leached vuggy granular quartz, containing locally 20-30% goethite in voids, and locally abundant quartz-after calcite replacement pseudomorphs.  Some massive to weakly banded pale green quartz has been found on dumps, as well as in drill hole intercepts.

Holes ER1-6 (451 meters) were drilled to test a 400-meter long segment of the El Roble vein zone.  All six holes intersected zones of quartz veining.  The strongest veining was encountered in holes ER1 and 4, located adjacent to the El Roble Mine.  Starting at the surface, both holes intersected over 15 meters of multi-stage white to tan to green quartz, with abundant iron oxides replacing sulfides.  Mineralization appears to be strongest where the vein zone forms in a porphyritic intermediate dike or sill.  Drill intercepts above 1.0 g/t are summarized below.

Future exploration should test the trend northwest on strike, where the ore zone may have been downthrown and preserved beneath felsic tuffs of the Upper volcanic series on the north side of the Hornitos Fault.  The number of high-grade samples seen in the El Roble area suggests this is a bonanza grade vein system, and the strike possibilities to the northwest should be fully explored.

Disclosure: Samples RRI50312 & 50315 are from sampling conducted in late 2017 and not previously reported. All samples are chip or channel samples except for *RRI2399, which was a grab-sample.

June 2018 Exploration by Riverside. The El Roble Vein located on the southern portion of the Project was also explored and consists of north-northwest trending veins within andesitic volcanics similar to various significant mining districts in the area including San Dimas, Tayoltita and El Concheno mines. Prospecting and sampling the area of the El Roble Vein identified two complementary and possibly cross-cutting veins south of the historic drilling.

One of the two new target areas, the El Roble 2 Vein, strikes north-northeast and appears to intersect the El Roble Vein in the areas of the past drilling. The El Roble 2 Vein is 0.5 to 4 m wide and was sampled four times over a 500 m strike length with one sample returning 1.8 g/t gold. The veining at this location comprises several smaller 30 cm wide parallel quartz stringer veins showing argillic alteration, silicification and green quartz with orange-brown carbonate. A second target area was found near the geological boundary between andesites and overlying dacites. This area is noted to be on strike with the east-west striking veins of the adjacent Sinaloa Mine property to the immediate east. Riverside’s most recent work returned one grab sample of 19.9 g/t gold and 200 g/t silver in addition to anomalous copper, lead and zinc. The sample is believed to show that the veins from the Sinaloa Mine extend onto the property providing a new exploration opportunity for the El Roble area.

In June 2018, Riverside followed up exploration at the Ciruelos Vein. The Ciruelo Vein is located within the northern concessions and consists of an east-west striking vein located along the contact between andesitic volcanics and overlying porphyritic dacites similar to the El Gallo District to the north operating with McEwen Mining in Sinaloa. The structure/vein is typically 1 to 3 m wide and has been sampled over a distance of 1.5 km, which is open along strike to the east. Numerous shallow, old workings are found on this structure where local gambosinos (illegal miners) have accessed and processed small amounts of high-grade gold mineralization. The vein shows a pinch-and-swell form with larger 30 m breccia blowout areas similar to major Sierra Madre Occidental vein. The alteration envelope is typically from several to tens of meters in width comprising predominantly silicification with some argillic alteration. The best precious metal values are associated with green quartz veins, which have become a priority target where sample values have reached up to half an ounce gold.

The Ciruelos Vein zone was mapped along a strike length of approximately 1.0 km within both Cretaceous andesite and overlying dacite lithic tuff flows.  The vein zone is exposed more as a series of stockwork/sheeted veins in a belt 5-20 meters wide, rather than one continuous fissure vein.  The zone trends generally N80W, dipping at 60-80N.  Previous mining focused on 0.5-3.0 meter wide vein zones displaying apple green to white sugary to granular quartz, with local banding and traces of disseminated sulfides. The western half of the vein zone, which includes the area of the historic Ciruelos Mine, is hosted within Cretaceous andesite. The eastern half of the vein zone consists of a diffuse zone of primarily white quartz stockworks and stringers in a zone up to 80 meters wide within the younger overlying dacite lithic tuff. The Ciruelos Vein has been developed by one drift, several small crosscuts and several surface pits and historic production has been minimal.

Freeman Smith, P.Geo., a non-independent qualified person to Riverside Resources, who is responsible for ensuring that the geologic information provided in this news release is accurate and who acts as a “qualified person” under National Instrument 43-101 Standards of Disclosure for Mineral Projects.